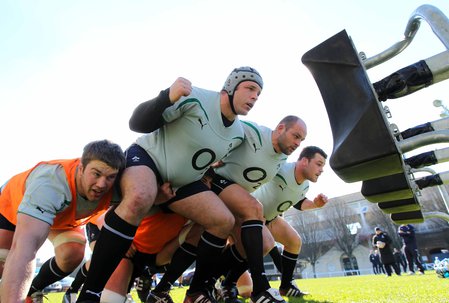 “I thought as a pack we went well and the set piece overall took another positive step forward. We talked about upping our concentration levels and the lineouts went really well. To come away with such a high return on our own ball and also nick one off what was a good Wales unit was great and is a testament to how much hard work Gert (Smal), Paul (O’Connell) and the rest of the boys put in to get that right. From my own perspective in the set piece, there were only a few scrums in the whole 80 minutes and I don’t think I have ever played in a game with so few of them.

” I think all three came from us holding them up in the tackle and forcing the turnover, something that Les (Kiss) has had us working hard on. We have to be our own harshest critics after that game and look at what we did do well and what we did not do well. Brian (O’Driscoll) is good in that way and along with the coaches will make us work on those positives, but also address what we can be better at.

“While we were gutted at the result and how that one decision for the Wales try had a big influence on the end scoreline, when we look back we can be both happy that we are putting ourselves in the position to win games, but also disappointed that we did not keep the pressure on them to get that important result. I think we can get into a position to make all of these little things fall into place.

“In the other games this year, we may have scored more tries, but maybe we were not as tight in our discipline. That was better at the weekend against Wales and so was the set piece, along with the guys still being able to create chances to score. We just need to couple those aspects up with the other parts that we have done well in over the championship. We need to keep faith in what we are doing and that eventually all of those little jigsaw pieces that are in our control can fall into place. We have confidence in each other that we can produce that big all round performance that is in us.

“England will obviously be our biggest challenge so far this year. They have been really good throughout the championship and even when the pressure was on them yesterday, they had enough self belief to pull through against Scotland. I think that says a lot about them. Their pack has probably been the outstanding one of the championship, with the lineout and scrum especially going well. Even though they have lost Andrew Sheridan, they have enough quality players like Corbisiero to bring in so as not to lose any momentum, so no matter what has happened in the last four games for us, we need to bring our very best game next Saturday.”

Meanwhile, Eoin Reddan is the only injury concern for the Ireland squad following the game against Wales on Saturday.

Reddan received a concussion in the first minute of the game and was replaced by Peter Stringer, but recovered well after the incident. He will be monitored by the Ireland medical team who will follow the IRB concussion ‘Return to Play’ protocols to determine when he has fully recovered.

He will also see a neurologist this week as part of the concussion management and at this point he is not being ruled out of contention for the game against England.