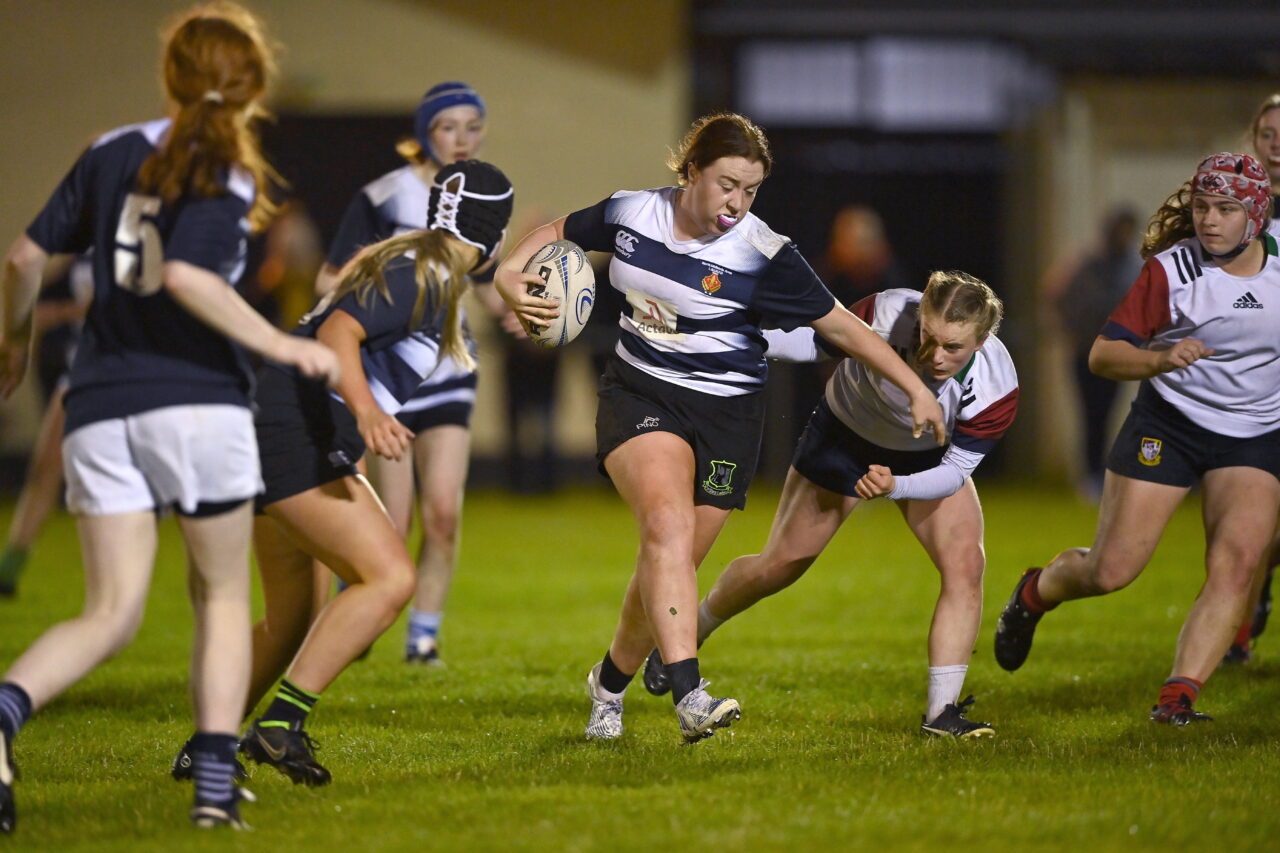 The 2022/23 Bank of Ireland Sarah Robinson Cup kicked off this week with games taking place in Newbridge and Carlow.

A powerhouse first-half propelled North Midlands to a comfortable win over Midlands in the Bank of Ireland Leinster Sarah Robinson (U18) Cup in Newbridge on Wednesday evening.

They started as they meant to continue when Niamh Murphy’s strong running opened up their opponents for the first try, expertly converted by Amy Rushton in the fourth minute.

The solid work of prop Clodagh Goulding and flanker Emma Jane Wilson was important in the battle for the gain line.

The ensuing stalemate was caused by the impact of Midlands front five forwards Shannon Doran and Saoirse Guinan and flanker Claire Burke.

However, North Midland’s cutting edge was sharper with Heidi Lyons a cause for concern and captain Julie Nokan stealing over for the second try in the 28th minute. 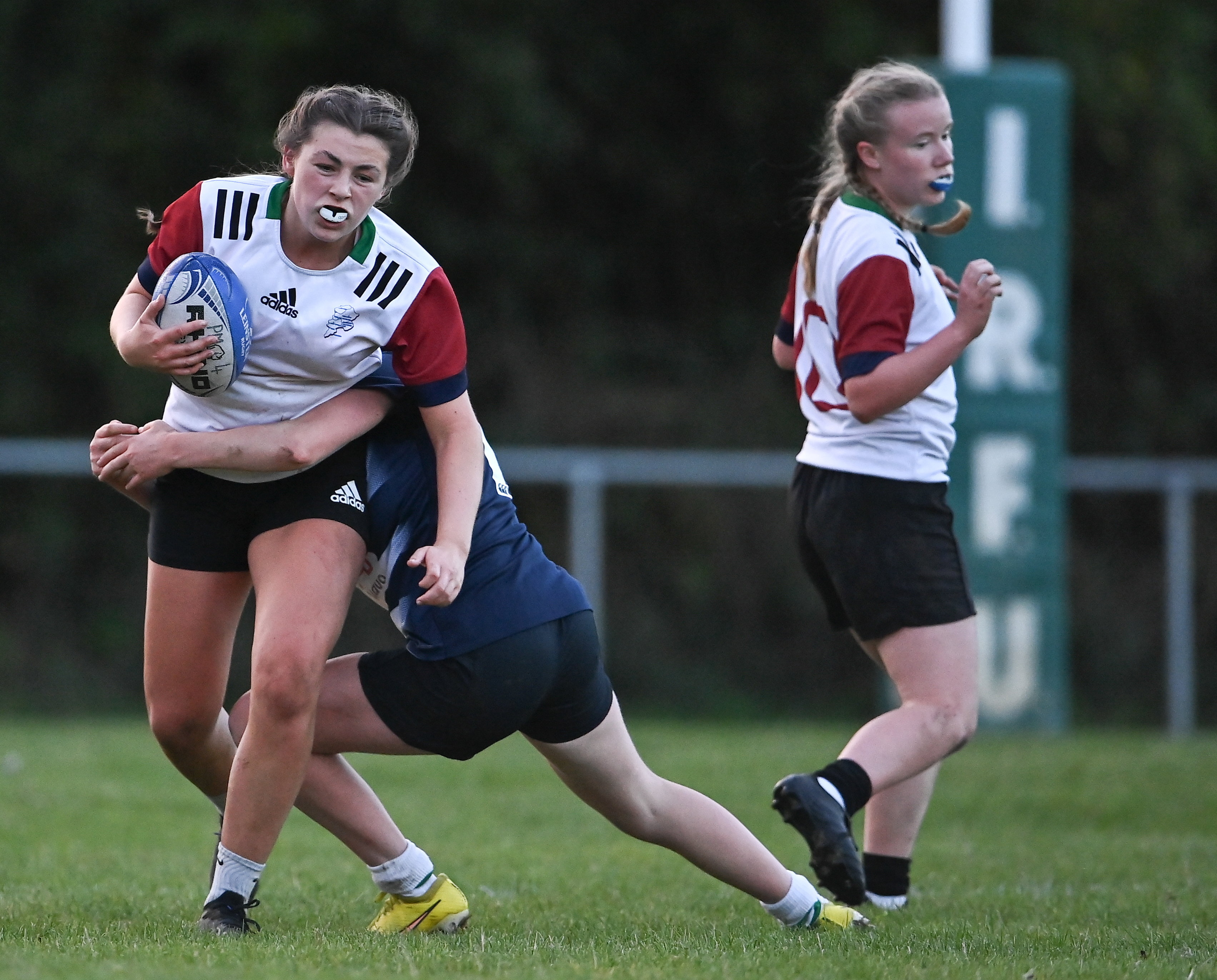 The hammer blow arrived just before the interval when full-back Murphy knifed through for her second try and Rushton’s second conversion to make it a 19-point gap.

Replacement Ellie White didn’t need a second invitation to pounce for the fourth try in the 47th minute.

It was at this point Midlands began to get a better grip on the tussle for territory, enabling number eight Georgia Young to ground the ball for Kelly Burke to convert in the 54th minute.

They were quickly back on the attack for replacement Hannah Connon to halve the deficit before May Kelleher arrived to seal the issue with the final try of the night.

A hat-trick by Kate Corrigan was the highlight of South East’s comfortable win over Metro in the Bank of Ireland Leinster Sarah Robinson (U18s) Cup in Carlow on Wednesday night.

The South East began at pace, taking the ball up and forcing the issue to create the opening try for centre Corrigan in the fifth minute.

However, the combination of mistakes made by the winners and tackles put in by Metro, led by loose forward Emily Tarrant, prop Hope Lowney and number eight Isobel O’Sullivan, kept them from adding to that start.

It looked like it would stay that way until South-East manufactured a try for Abby Healy which the out-half herself converted for 12-0 at the interval.

Better again, SE mirrored the opening half by getting out of the blocks quickly to apply pressure for the hard-charging Corrigan to nab her second in the 40th minute.

Metro were handed a way back into the game when hooker Bronagh Boggan and second row Carla Cloney were binned in the 44th and 49th minutes, respectively.

This is when the no-nonsense defence of flanker Ciara Short and number eight Orla Wafer came to the fore and it was soon supported by the return of Boggan and Cloney.

Amid all of the chaos brought on by the yellow cards, Metro were able to dominate from hard carries and flanker Tarrant crashed over for a try.

Healy’s use of the ball from crossfield kicks and passing was a feature of the game, particularly aimed for Robyn O’Connor and Corrigan.

Ireland U18 full-back O’Connor stepped into the breach to punch in tries in the 55th and 57th minutes, the latter converted by Healy.

All the while, Metro scrum-half Charlotte Nagle, wing Brooke Fagan-Merrigan and centre Sadhbh Furlong were prominent.

South East emptied the bench, thereafter, and it was left to Corrigan to complete her haul in the 66th minute for a night the Tullow girls won’t forget in a hurry.