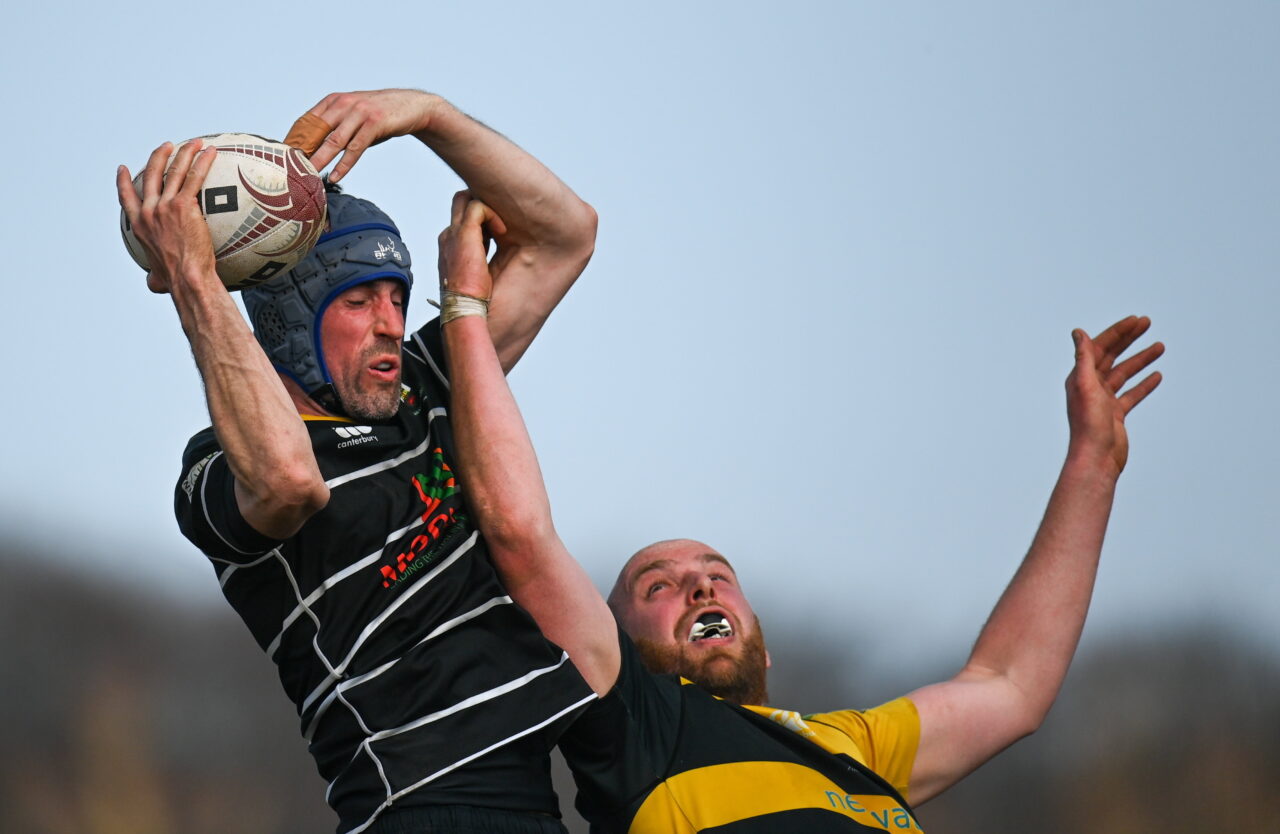 Mullingar are the exception to the rule as the only club outside Leinster League 1A to make it to the penultimate stage.

The Midlands club have been drawn to play Ashbourne, while Dundalk will play Kilkenny.

The semi-finals will be played next Sunday, 3 April, at North Kildare and Naas respectively.

This was a ‘knock ’em down, drag em out’ traditional Towns Cup scrap which Kilkenny edged in Foulkstown.

In a game of few chances, where defences had the edge for the most part, the home side’s view on playing the percentages paid dividends early on.

The pressure applied accrued penalty opportunities which scrum-half Hugh Corkery took for a 6-0 lead in the first quarter.

Already, the ferocity of the physical give-and-take suggested this would go right to the wire.

A quick scouting report would have revealed how the Carlow centres are a handful and Dave McDermott’s break was turned into a try by midfield partner Donal Crotty in the 26th minute.

A smart move at the front of a Kilkenny lineout sent David O’Connor through the middle where Owen Edghill executed a try-saving tackle to leave it 6-5 at the break.

No 8 O’Connor would not be denied the next time he came within a sniff of the whitewash for Corkery’s conversion to make it 13-5 in the 50th minute.

But, Kilkenny were unable to stretch away from the visitors. In fact, Carlow had the better of the territory and the chances. 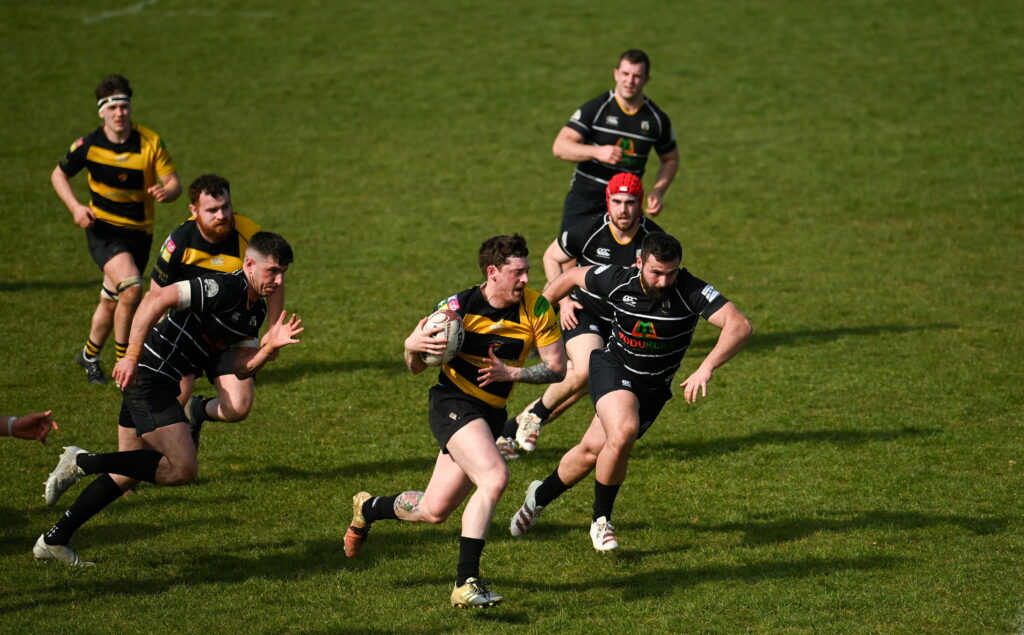 They would probably look on their decision-making as suspect in the aftermath, eschewing shots at goal to go for gold through the lineout.

In the end, by the time full-back Richie Whyte decided to make it a one-score game, it was into injury-time and Kilkenny had enough discipline to see it out.

The individual brilliance of Derek Williams and the impact of the bench were the keys to Dundalk making the trip to Clonattin worthwhile.

Gorey will rue the way they managed their leads, initially going ahead from Mikey Duke’s penalties in the first quarter.

Each time, Dundalk were able to draw level from the goal-kicking of Ultan Murphy in a real heavyweight clash.

The north Wexford club’s back row of Killian Breen, Jordan Ahearn and Stanley Hadden was all-action.

That unit was the driving force behind another Duke penalty before flanker Ahearn claimed their first try in the 35th minute.

The Louth club had the answer for that as wing Derek Williams showed speed and footballing instinct in controlling a kick through for a sweet try to leave it 14-11 at the break.

Gorey out-half Fionn O’Loughlin’s stunning individual try was completed by a well-judged kick ahead and enough pace to beat the cover. Duke converted.

Given the closeness of the exchanges, it looked to be decisive until Murphy stroked a penalty to revive Dundalk’s hopes.

The home side held firm right up until the last minute when Dundalk broke out of defence from Paddy Reilly’s break.

Replacement Ryan McShane appeared off his shoulder to have the fresh legs to go from 40 metres for Murphy’s conversion to make it 21-all.

On top of that, Gorey still had time for one more attack where another replacement Greg Whatley charged down Duke’s drop goal to send the tie to extra-time.

Dundalk plundered two tries by wing Paddy Reilly and yet another replacement in scrum-half James O’Connell in the first 10 minutes. 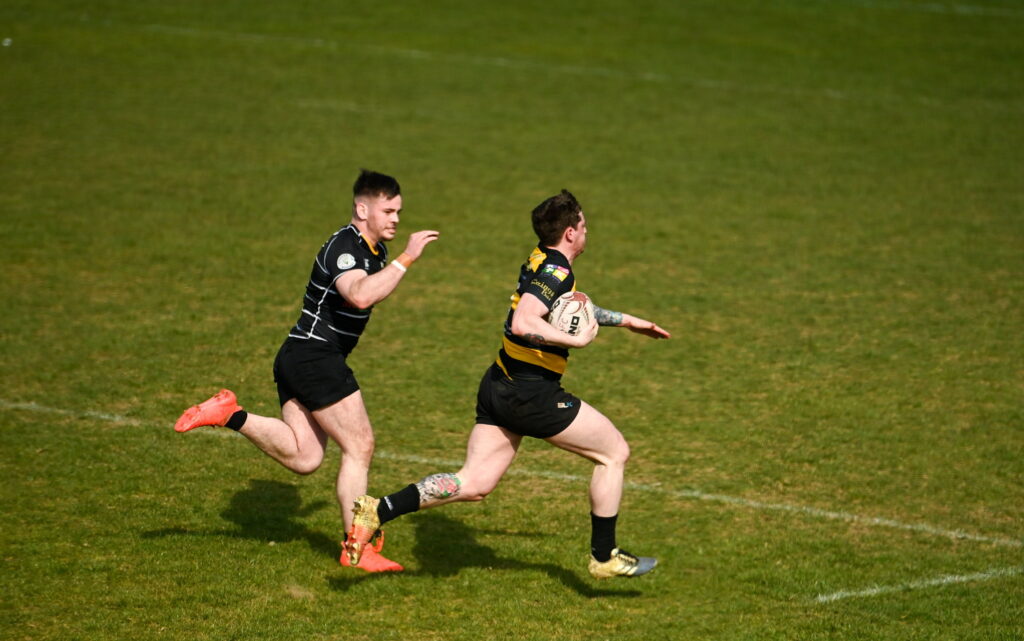 It appeared to be down to superior fitness, an impression reinforced by Williams’ second try, converted by Murphy.

Those wily old foxes out in Ashbourne had too much guile for Athy at Milltown House.

Their winning pedigree has been honed over many years and the experienced men in the forward pack had too much experience for the youthful, lighter Athy eight.

Of course, it didn’t help the Kildare club’s confidence when Ashbourne powered into a 7-0 lead from Andrew Whittaker’s finish and Gavin Kennedy’s conversion in the fourth minute.

A yellow card for Whittaker did level the playing field and Athy wing Tom Glynn struck a penalty in the 13th minute.

However, the Leinster League 1A club was able to move through the gears for second row Sean Kent to go over from  Jake Wall’s dexterous offload for another converted try at the end of the first quarter.

The addition of a penalty from out-half Kennedy stretched the advantage out to 17-3 at the interval.

It looked like a steep hill, if not quite a mountain for Athy, given Ashbourne’s know-how around game management.

Athy are a club on-the-up, evidenced by how they dominated 2A this season. But, this was another level.

However, they were not about to let the scoreboard get in the way of their goal, scrum-half Evan Stephenson breaking superbly to set up a simple two-on-one for Tony Martin to cross in the 44th minute.

Three minutes later, they came again to force a penalty when the forwards rumbled menacingly. The reliable Glynn struck from close range to make it a four-point game.

Game on. Or so it looked. That was when Ashbourne decided to take control, using the front row to squeeze the game in the scrum.

Behind the set-piece were half-backs Shane Bass and Kennedy probing and manoeuvring the forwards into position.

Field position was taken and Kennedy clipped over another three points before Ashbourne’s physical strength began to take a toll.

The ability of Ashbourne to play the game at their pace, frustrating Athy’s need for speed resulted in a penalty try in the 62nd minute.

An inevitable air descended on the game as the home club played smart, effective rugby, even making room for an excellent try by right-wing Matt Connolly for Kelan Toolan to convert. 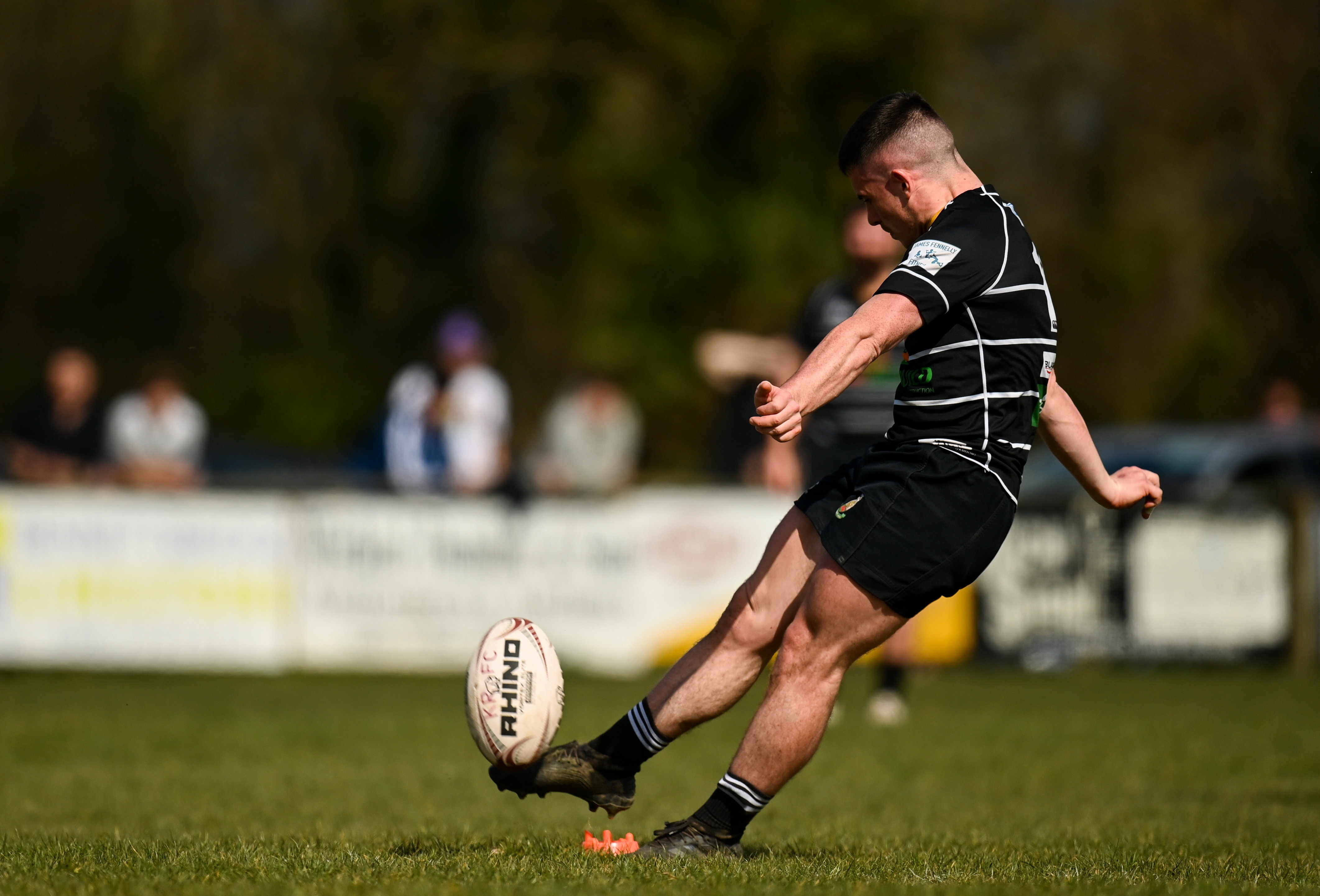 Mullingar got ahead and stayed there to make the Towns Cup semi-final at Shay Murtagh Park.

It must be noted how Clondalkin were weakened by the absence of No 8 Simon King and centre Dave Jebb.

They weren’t made to feel any better about it when Stuart Flynn notched up penalties in the seventh and 20th minutes.

The inclination to build scoreboard pressure looked like an even more convincing argument when Alan Brabazon raced away for Flynn to convert for 13-0 in the 21st minute.

However, there were signs of a Clon’ rebound in the previous exchanges, their solid approach play not quite finished off.

Scrum-half Thomas Ankers had a snipe off a fast-ball and flanker Neil Finley completed the task for Jack Holland to kick the extras on the half-hour.

Mullingar landed a body blow when sure hands along the line put hooker Conall Fagan over on the right, Flynn arrowing over the conversion for 20-7 at half-time.

Clondalkin had the benefit of the wind in the second period and won possession from the restart.

Powerful carries from hooker Brian Doyle and flanker Aaron Donnelly took play inside the 22 and Holland put width on the ball for centre Fionnan Madden to power over.

From there, the Mullingar bench made an impact to get on top again, Flynn kicking a penalty to put two scores between the clubs.

Clondalkin were not quite done, kicking to the corner late on where they were met by excellent Mullingar defence.

It ended two tries apiece. The telling factors were the edge in fitness and discipline shown by the midlands club.