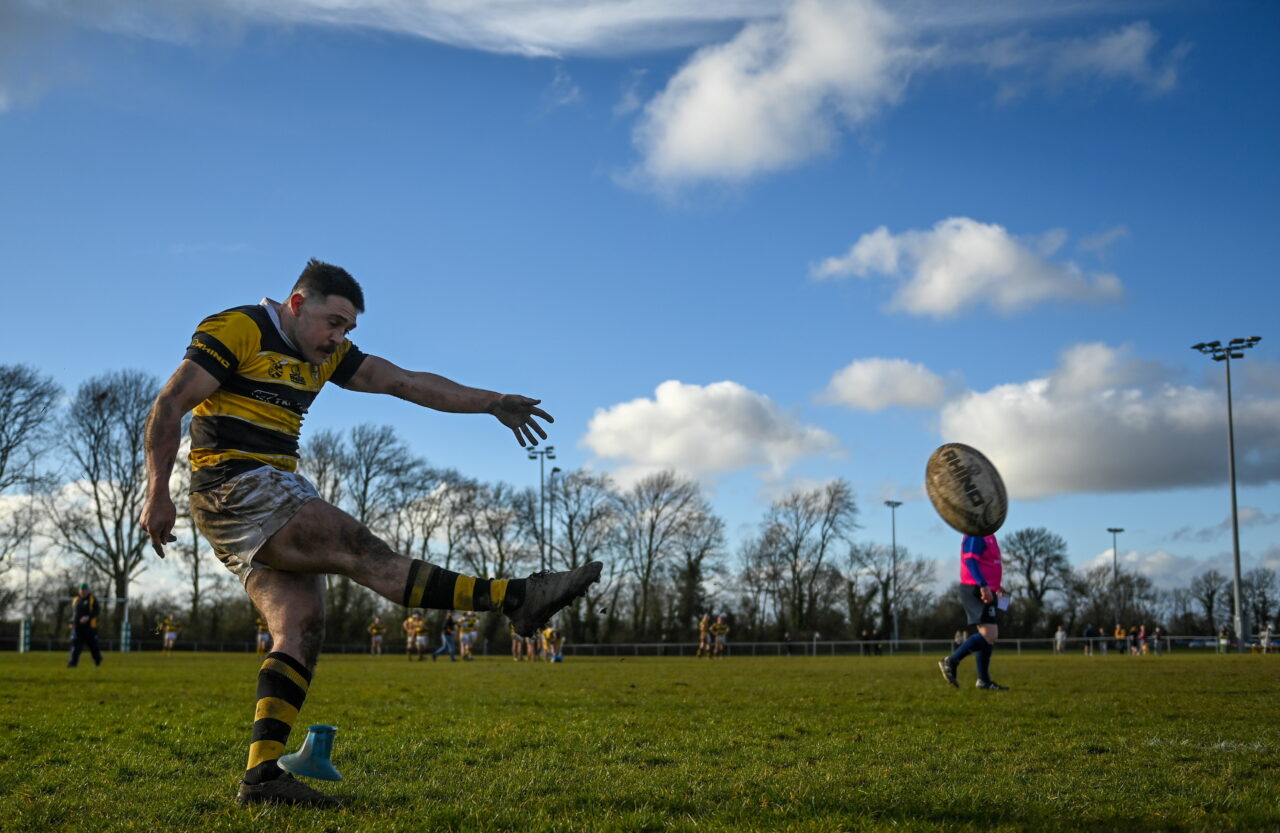 The second round of the Bank of Ireland Provincial Towns Cup took place at eight venues on Sunday.

As usual, it was blessed with terrific tussles, and eight incredibly tight contests.

See the third round draw here

At one point, Leinster League Division 2B Edenderry looked like bridging the gap to 1A Kilkenny in a final scoreline that was most flattering to the winners at Coolavacoose.

The visitors may have been duped by getting off to a fine start from a try by Liam Caddy.

They were rocked by a 20-point burst by Edenderry in a brilliant period of play that yielded tries for wing Joey Higgins, flanker Mark Rushe and points from the boot of Shane Cummins.

In fairness, Kilkenny did regain their composure, thanks in no small measure to prop Murt Leahy and second-row Wes Carter.

They applied the right blend of using their forwards to make headway and using their backs to reduce the leeway as centre Podge Mahon and wing Lyndon Brannigan crossed for tries to make it 20-17 at the break.

Edenderry had impressive performers in full-back Richard Gill and young tight-head Dylan Casey, enabling the home side to press for more scores.

The best they could do was apply pressure, despite getting over the whitewash twice and camping inside the 22 for a sustained period.

When Edenderry couldn’t deliver enough points from their possession, Kilkenny showed them how to do it.

County Carlow locked down their hosts’ attack to come away with the spoils from Balreask Old.

The best way to quieten a home crowd is always to limit what they like to do and the effectiveness of Wes Shirley at the lineout stalled Navan’s attacking platform.

Into the teeth of the wind, Carlow made steady enough ground for Richie Whyte to strike two penalties for 6-0 at the interval.

It put Navan in a corner they could never really fight their way out of as their backs were closed down across the three-quarter line.

Carlow were patient enough to play the waiting game, made easier by a Whyte drop goal for a two-score lead.

The icing on the cake came from a lineout, swiftly turned into a maul for number eight Conor Treacy to ground for the only try of the game, Whyte converting.

The home side gave a demonstration on how to use a strong wind to strangle their guests at the set-piece.

This was old-fashioned Cup rugby at its’ best, Athy using the scrum to squeeze out penalties with wing Glynn sharp from placed-balls.

The first try arrived from openside Tim Perry in the seventh minute and Glynn was unerring for five penalties and the conversion of scrum-half Evan Stephenson’s try to make it 27-5 at the halfway point.

North Kildare did not have the depth to cope with the loss of two players to injury from last week and two more to Covid on the day of the game.

Despite the conditions, there was no way back for North Kildare, even though full-back Jack Gartland added a second try to second-row Mark Farrell’s effort and out-half Joe Gerry kicked five points.

On the hour, centre Ciaran Fennessy was in the right place to pick up the third try and out-half Craig Miller’s fourth in the 75th minute put a cap on a controlled, commanding display in which Glynn never missed a kick.

The power of Ashbourne was too much for Naas at Milltown House.

Unfortunately, Naas lost their loose forward Killian O’Brien early on which led to some adjustments.

Naas centre Andy Ellis, a standout, was able to breach the home defence for out-half Colm Doyle to convert in the 16th minute.

Ashbourne were able to control the scrum which was the platform they used as often as possible.

It wasn’t long before it was level when Shane Bass was able to convert pressure into points for Gavin Kennedy to kick the extras.

However, Ashbourne really turned the screw in the second quarter, Robbie Sparza’s lineout work paving the way for Jimmy McCaghy to punch in the try.

Then, out-half Kennedy broke the line to serve Colm Craigie for the third try, converted by Kennedy to make it 19-7 at half-time.

It certainly got interesting when scrum-half Derry Lenihan benefitted from a spilt ball to ghost over in the 49th minute and a Doyle penalty narrowed the difference further.

It was a fair old scrap from there, Naas looking to stretch their game as Ashbourne preferred to squeeze the pressure well enough for Kennedy to shoot the final three points of the game.

Dundalk completed a miracle comeback at Blackgates, bolting back from 17 points down with 10 minutes left to play.

Tullow played to their strengths with number eight William O’Brien leading the charge up-front and Paul Canavan orchestrating matters in the backs.

Second row Martin Cole and O’Brien were able to break through for tries and Canavan added seven points from the boot to build a 17-10 edge at the interval.

That hole got appreciably deeper when O’Brien and Cole repeated their earlier feats to make it 27-10 going into the final ten minutes.

In a twist of fate, Dundalk lost their hooker Zak Coen, taking away the lineout as an option.

The introduction of fresh legs, the use of the tap penalty and the offloading game of Johnny Williams in the midfield soon started to pay dividends.

Wing Derek Williams, scrum-half James O’Connell and centre Dave Symes, who created and scored a try, split the defence for three tries which Ultan Murphy nailed to snatch victory from the jaws of defeat.

Mullingar started and finished well enough to get the better of Tullamore in a hard-fought, local derby at Spollanstown.

The home side gradually came to terms in the physical exchanges to apply enough pressure for Cathal Farrell to kick a penalty, full-back Scott Milne to steal over for a try and out-half Farrell to land his second penalty for 11-10 at the interval.

Three yellow cards for Mullingar did little for their cause as Tullamore began to assert their authority, left-wing Eoghan Hickey going over to make it 16-10 in the 63rd minute.

The Offaly club had the territory, possession and lead and, still, Mullingar found the greater reserves of energy, a sweet movement from right to left putting wing Eoghan Moore in at the corner flag.

The same strategy reaped further rewards when second-row Daryl Quinn stepped off his left foot to beat the last man back for the winning try in the 75th minute. 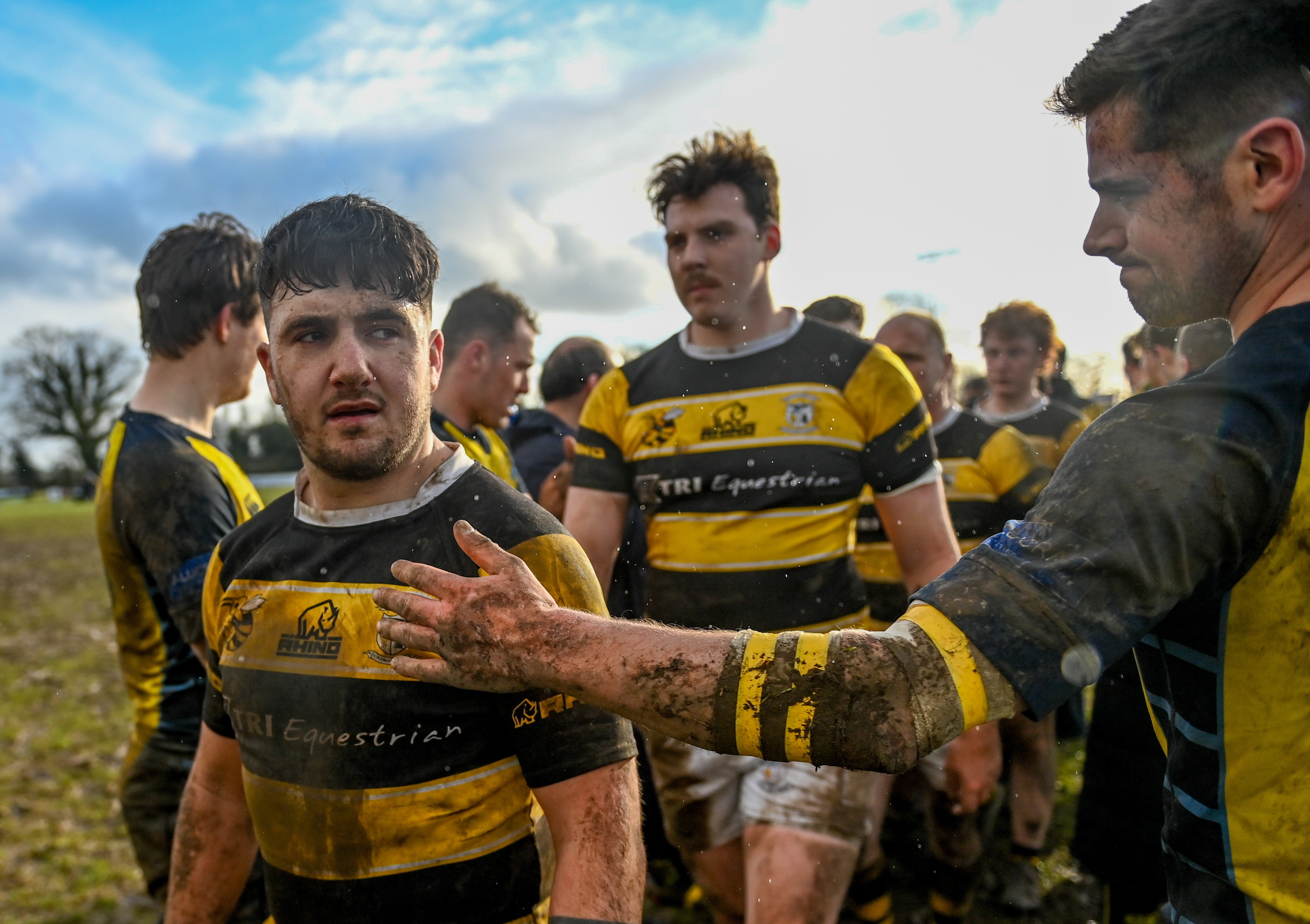 There could be something special happening in Clondalkin as they administered a double-scores defeat to Newbridge at Rosetown.

The Dubliners managed just the third win of their season and a first away from home to make it into the third round with a season’s best performance.

They took advantage of a strong wind at their backs to get in front from a first-minute penalty by Jack Holland followed by a try by wing Darren Madden, converted by Holland.

The muddy conditions made positive rugby difficult, Clon’ keeping the scoreboard ticking over with two more penalties from out-half Holland for a 13-point gap.

The homesteaders did nibble away at it with a penalty by Robbie Waters to leave it 13-3 at the break.

It was a heavy slog from there on, Clondalkin’s scrum getting the upper-hand and scrum-half Tomas Ankers grubber was kicked on and touched down by wing Niall Nolan, converted by Holland, in the 55th minute.

It was left to Newbridge to conjure up a lovely try by Dylan O’Keefe in the left corner for Waters to add a terrific left-to-right conversion.

Gorey produced a workmanlike performance to move away from Boyne in the second-half at Shamrock Lodge.

Gorey were in control from early on and got their hooks in at the set-piece and played the game at their pace, using an aggressive defence to shut the door.

Boyne number eight Karl Keogh and Gorey centre Mark Kehoe – he was later replaced due to injury – exchanged penalties in a half of few chances.

The Louth club was unable to break out of their half as Gorey made far better use of the elements.

In fact, the Wexford club got over the line three times without getting the nod from the referee as it ended 3-all at the break.

Out-half Michael Duke stepped in for Kehoe to add a penalty and then in-your-face defence forced a turnover for wing Brian O’Leary to exploit a lack in numbers out wide for 11-3 in the 53rd minute.

However, flanker Joe Sweeney and Keogh were not about to give up the chase in a defiant Boyne pack.

Centre Graham McQuillan and full-back Jack Mitchell were also excellent as scrum-half Nick Smith burst over to close the deficit to three.

But, Gorey had enough in the tank for Duke to strike a penalty and for centre Andrew Walsh to score from an interception.