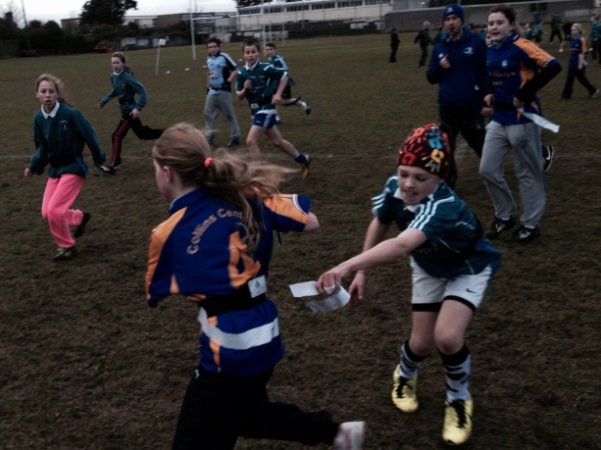 With the Christmas break over and all the schools back to normal activity, over 130 boys and girls converged on Suttonians RFC for their eagerly anticipated Primary School tag rugby blitz…

The schools involved had just completed a six week ‘Play Rugby’ programme where many had experienced the game for the first time. Over the preceding month and a half pupils from The Burrow National School, St Fintan’s Primary School and Howth Primary School had learnt all the skills necessary to play the game and this was certainly evident on the day.

The morning kicked off on a cold but sunny day with a 6th class blitz which was played in great spirit. All the children really enjoying the day and learned some new skills. The matches were all tightly contested and the teams chosen for the final were not the teams who won the most matches but who played the game in good spirit and with good sportsmanship. The final was between The Burrow and St Fintan’s, with St Fintan’s coming out on top. However, the reward was not bragging rights but a few little surprise goodies from Leinster Rugby for everyone that took part.

A massive thank you must go to all the referees, teachers and principals for their help on the day and during the programme. Also, to Suttonians for allowing the use of their facilities for the morning and the coaching work done by Glenn Predy of Leinster Rugby throughout.

If any other schools in the Sutton area would like to participate in similar programmes please contact Glenn Predy on 086 3994839 or email on SuttoniansCCRO@leinsterrugby.ie.