Salmo Players Awards a sell out… 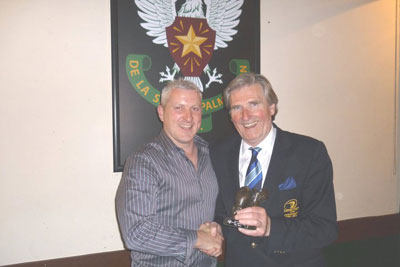 The night started on a great note, when Leinster Branch President Kevin Fitzpatrick (a DLSP past President and member), proudly brought the Heineken Cup into the hall to a standing ovation and a deafening chorus of “Championees” at his home club, which fittingly was his last official function as the 2010/11 President of the Leinster Branch.

This Season Salmo fielded at 1s Xv, J1, J3, J4, J5, U-21,Vets and U-19 levels. This annual night is where the players vote for who they felt was the best player on their team over the season.

Also on the night current first team player Conor Hickey, who received a serious injury the season, was presented with an award for over 25 years service as a player for Salmo.

The evergreen J5 player Brian Murray, who at 52 years of age also showed his true colours as a real clubman, lined out for evey team at some stage this season when they were stuck (except the firsts) and received the inaugural overall Players Player award.

David Lillis, who is standing down as Director of Junior Rugby, was presented with an award from the players, for his outstanding services to Junior Rugby at Salmo over the years.

Finally Kevin Fitzpatrick was presented with an award from the players, in recognition of his services to DLSP and Leinster Rugby in his year as President.

More information and photos on www.dlspfc.ie