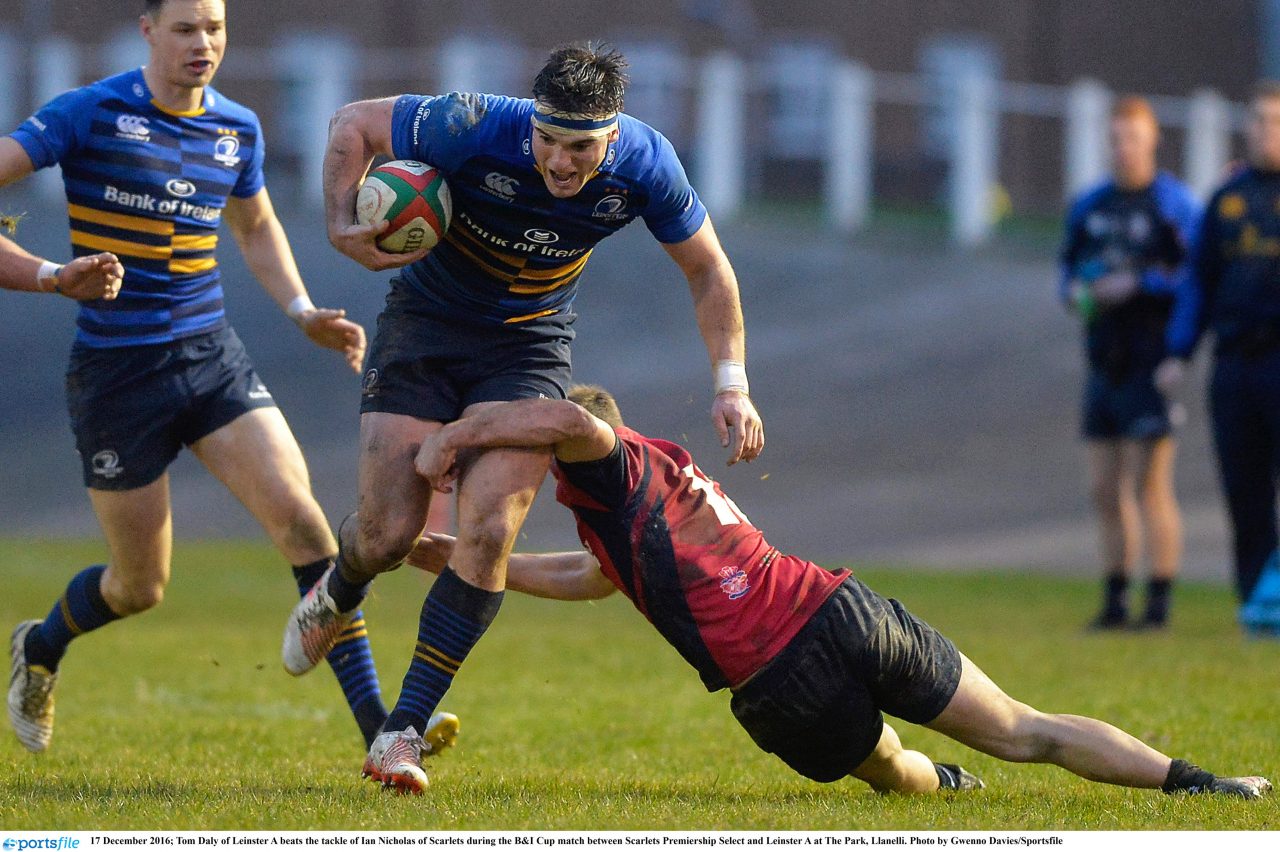 17 December 2016; Tom Daly of Leinster A beats the tackle of Ian Nicholas of Scarlets during the B&I Cup match between Scarlets Premiership Select and Leinster A at The Park, Llanelli. Photo by Gwenno Davies/Sportsfile

Number 8 and captain Morgan Allen crossed for a try in each half for the home side as they picked up a bonus point win that takes them to the top of the pool. The only bonus for Leinster ‘A’ was the fact Richmond managed to turn over Nottingham 20-12 in the other game in the pool.

It means that going into the final two round, the Scarlets PS have a five-point lead at the top over both Leinster ‘A’ and Nottingham on 10 points. The Scarlets travel to Richmond in round 5 next month, while Leinster ‘A’ have to go to Nottingham.

“Nottingham came to Donnybrook and beat us and we know that if we lose another game we are probably out of it. I still think two teams can go through from this pool, but we can’t afford to slip up again,” said Leinster ‘A’ head coach Hugh Hogan.

“We came to Carmarthen expecting a tough game and that’s exactly what we got. It may have been a big score in our favour in Dublin, but we played really well. We knew they would be hurting and would have a point to prove and they were worthy winners (today).

“They scored a try just before the break and that gave them a huge confidence boost. Their scrum took control and their outside half, Dan Jones, played a clever territory game – something we need to learn more about.”

It was Jones, last season’s Wales Under-20 Grand Slam out-half, who opened the scoring with a third minute penalty, but the home side were not able to build on that lead. Leinster ‘A’ dug deep on a tacky surface that was totally different to the 4G pitch at Donnybrook and eventually got their noses in front.

The Scarlets lost lock Tom Price to a yellow card midway through the first half and then the visitors struck. Winger Barry Daly made the break and out-half Jimmy O’Brien was on hand to take the offload and speed to the line for a try which Tom Daly converted.

It looked likely that Leinster ‘A’ would hold onto their lead going into the break, but another Jones kick deep into their territory earned the Scarlets a scrum five. Allen got over after four phases and Jones converted to make it 10-7 to the home side at the interval.

The power of the home scrum began to make an impact and after two strong scrums close to the Leinster ‘A’ line, Jones was able to weave his way over for a try which he was unable to improve. With their tails in the air, the Scarlets PS went in for the kill.

A big hit in midfield by Price forced Leinster ‘A’ to drop the ball and home winger Tom Williams hacked through and won the race for the try. This time Jones converted to make it 22-7.

It was all back foot rugby for Leinster ‘A’ in the gloom in the second half and they were not helped by prop Peter Dooley’s sin-binning. Another powerful scrum from the home pack gave Jones the chance to kick for the corner. From that position Allen was able to drive over for his second try and the vital bonus point score.