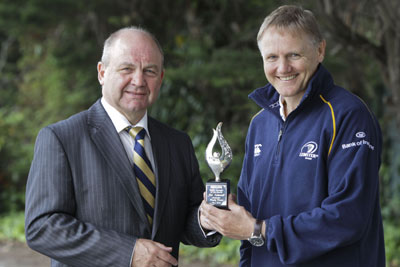 Philips Ireland have named Joe Schmidt (Head Coach, Leinster Rugby) as Philips Manager of the month for May 2011…

On the 21st May in the final of the Heineken Cup in the Millennium Stadium in Cardiff and in front of an attendance of 72,456 supporters, Leinster staged a remarkable second half comeback to defeat Northampton 33-22 and so claim their first trophy under Joe Schmidt and their second Heineken Cup trophy in three years.

The Philips Manager of the Year awards were inaugurated in 1982 and since then have recognised a vast array of individual managers in every sport. Each year a manager of the month is selected with the winner for the year picked by the judging panel from the monthly winners.

The winner is announced at a lunch in December attended by the managers, Government Minister, representatives of sporting bodies, the media and trade customers of Philips Ireland.

The judging panel is made up of representatives from The Irish Times, Irish Examiner, Belfast Telegraph, The Star, Irish Independent, Newstalk, TV3 and RTE.