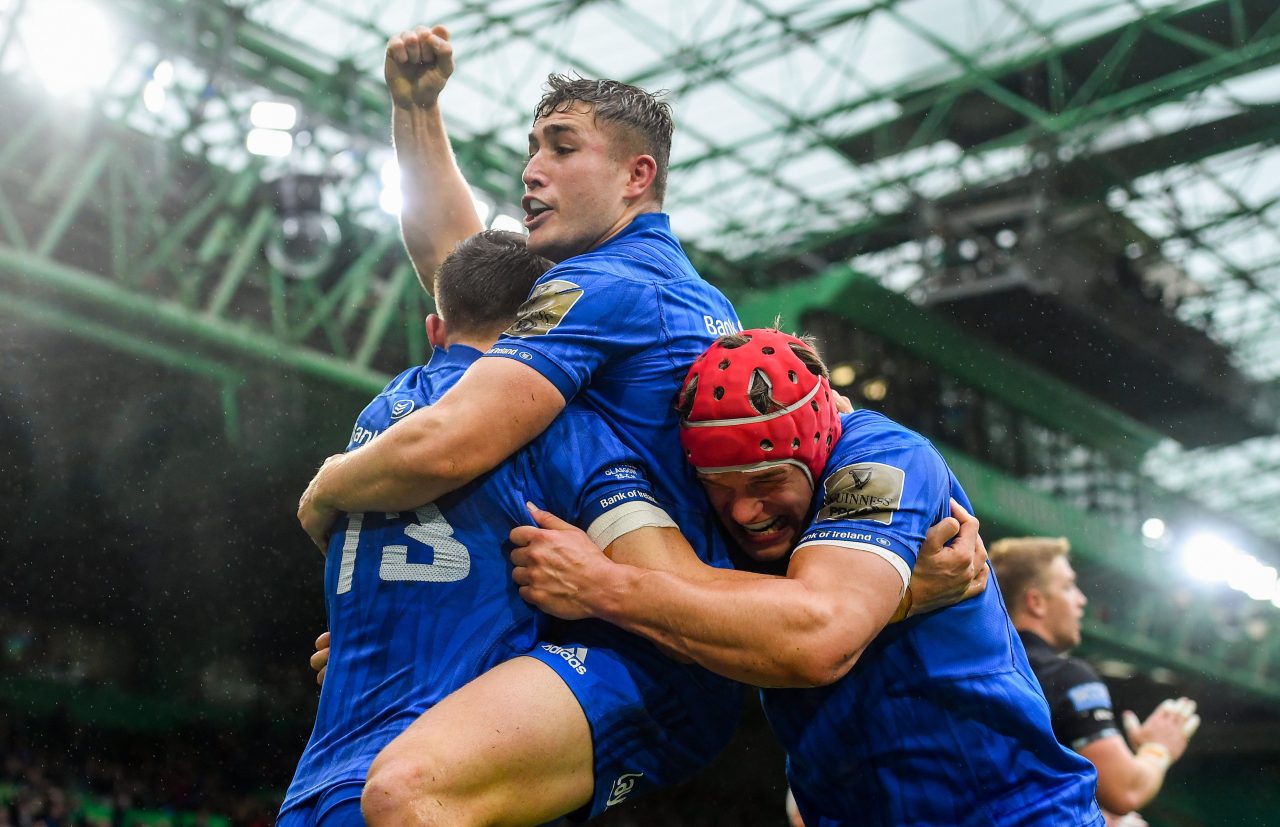 Leinster Rugby’s second consecutive Guinness PRO14 title arrived on 25 May at Celtic Park in Glasgow at the end of a long season which started in Cardiff on 31 August.

The 15-18 win against Glasgow Warriors was the end of a campaign in which Leinster also had 21 regular season games followed by a semi-final against Munster.

Here’s a recap of all of the games that led to the trophy being lifted in Celtic Park:

Key scores from Jamison Gibson-Park and Bryan Byrne late on helped Leinster edge ahead of Cardiff Blues in this eight-try cracker at Cardiff Arms Park.

New signing Joe Tomane and Caelan Doris were making their first starts for Leinster. The hosts were clinical early on but could only add three points in the last half-hour as Leinster struck for 19 to snatch victory. 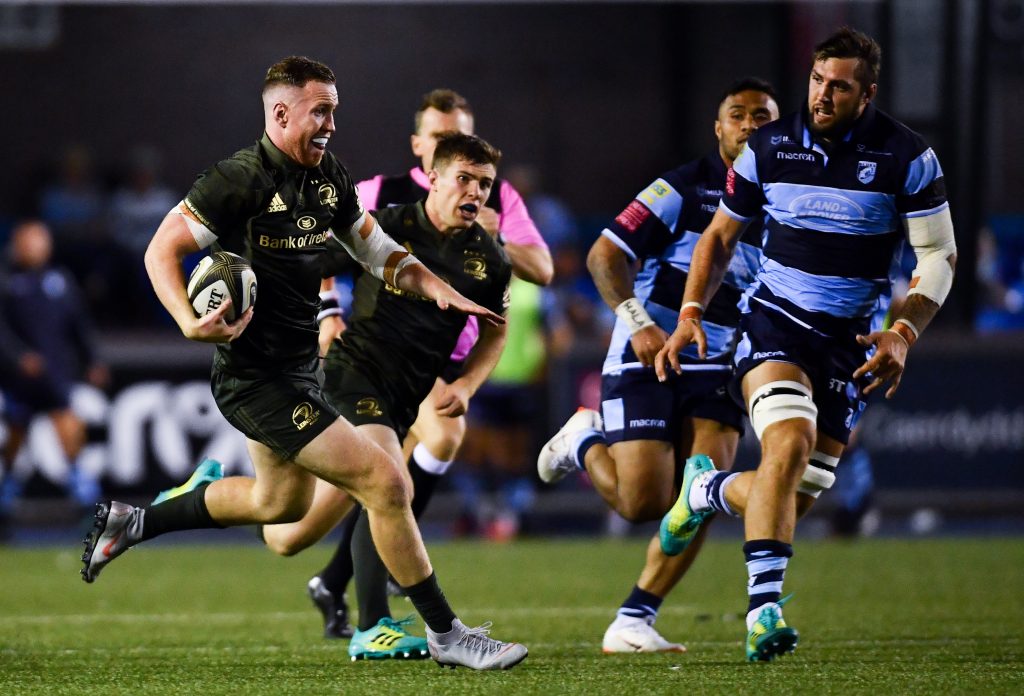 Halfpenny landed two early second half penalties to overturn Leinster’s half-time lead and Gareth Davies’ opportunist 68th-minute try pushed the margin out to nine points. Captain Rhys Ruddock touched down with five minutes remaining to set up a grandstand finish, but the Scarlets hung on to win.

Academy scrum-half Hugh O’Sullivan made his senior bow as a replacement in this game while five of Leinster’s international contingent made their seasonal debuts including Josh van der Flier making a try-scoring return from an ACL injury.

That was one of seven tries racked up by Leinster as they built an unassailable lead.

This bonus-point victory over 14-man Edinburgh returned Leinster to the top of Conference B. Wingers Fergus McFadden and James Lowe both touched down as Leo Cullen’s men led 12-0 following a very physical first half, the province absorbing a long period of Edinburgh pressure in between those tries.

Sexton, Larmour and Ringrose also added scores in the second half while the visitors had Pierre Schoeman dismissed late on. 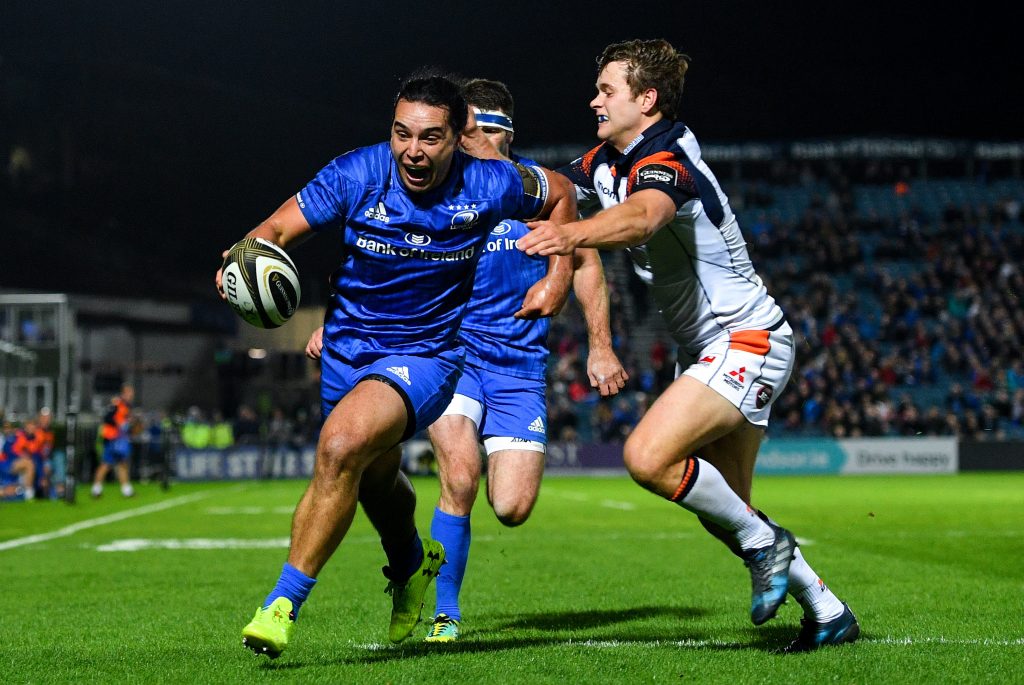 Johnny Sexton ended a bruising first half with successive penalties, handing Leinster a 6-3 lead with the wind advantage to come. Seán O’Brien had an earlier than expected entrance in the 25th minute, replacing the injured Rhys Ruddock.

Second half tries from Garry Ringrose and Seán Cronin compounded the damage for Connacht who lost Dominic Robertson-McCoy to a red card.

Ross Byrne’s 69th-minute penalty edged Leinster over the finish line in a thunderous 30-22 derby win over Munster at a packed Aviva Stadium.

It was three tries apiece in another edge-of-the-seat edition of this enduring Interprovincial rivalry, with out-half Byrne kicking a crucial 13 points while James Lowe scored two tries and forced a penalty try.

Man-of-the-match Jamison Gibson-Park was the controller-in-chief in a contest which was played in slippery conditions in Treviso. Leinster took their chances well to lead 12-3 at half time thanks to tries from Adam Byrne and James Tracy.

The win maintained Leinster’s five-point lead at the top of Conference B. 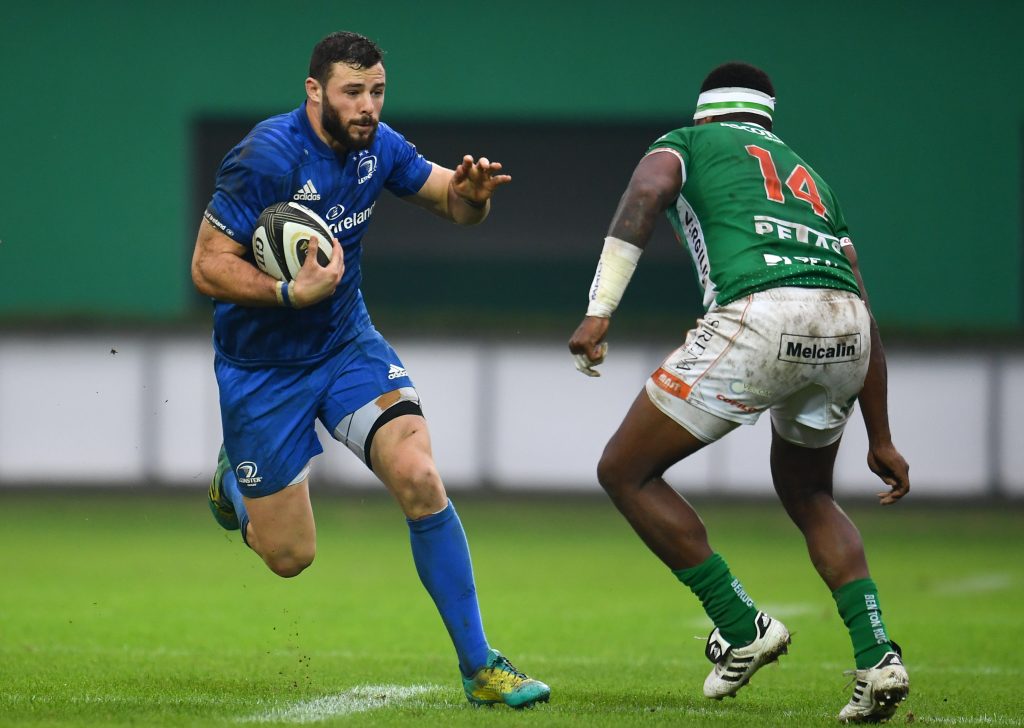 Three tries in the final four minutes of the first half proved vital as Leinster defeated the Isuzu Southern Kings in an action-packed 11-try encounter at Madibaz Stadium in Port Elizabeth.

The opening 40 minutes ended with Leinster leading 33-12, Adam Byrne’s second try in as many games and a scrum-won penalty try giving them a narrow advantage before the hosts’ indiscipline was punished with Jamison Gibson-Park’s fourth try in this season’s championship and two more from back rowers Dan Leavy and Max Deegan.

Hooker Bryan Byrne completed Leinster’s haul with a 63rd-minute try, which was an important one in the end as the resilient and hard-running Kings bounced back with three second-half tries to earn a brace of bonus points.

Nineteen-year-old flanker Scott Penny touched down on his Leinster debut as a young side swept the Ospreys aside, winning a one-sided encounter 52-7 at the RDS.

There were also debuts in the second half for young replacement backs Jimmy O’Brien and Jack Kelly, while fellow Academy-man Ciarán Frawley finished with 17 points in a man-of-the-match performance.

Scrum-half Paddy Patterson made his debut for the province from the bench as Caelan Doris, Hugo Keenan and Jimmy O’Brien (two) scored their first senior tries for Leinster in a landslide 59-10 victory over the Dragons at Rodney Parade.

Leo Cullen’s men ran in nine tries as they broke the 50-point barrier for the second week running. 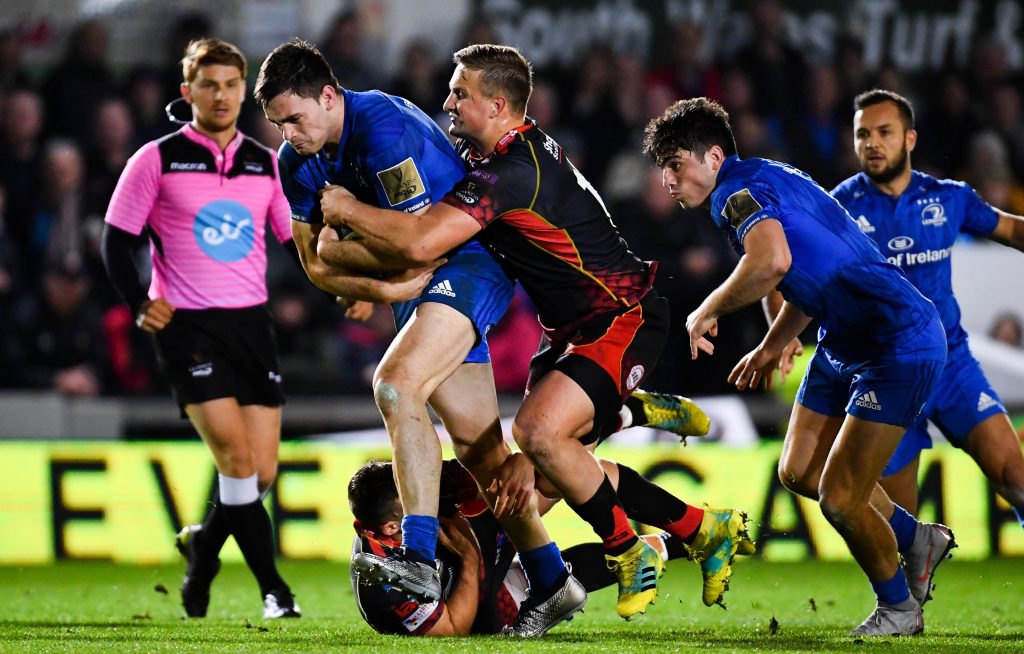 The prop scored at the end of an energy-sapping 41 phases, denying Connacht their first win over Leinster in Dublin since September 2002. Trailing by 17 points, the hosts reeled off tries from Seán Cronin, Dan Leavy and Porter in the final 12 minutes to clinch victory.

Second-half tries from James Tracy and Max Deegan were not enough for 14-man Leinster as they went down 26-17 to Munster in a feisty game at Thomond Park.

Munster led by 10 at the break and added further penalties through Joey Carbery and a late try from Keith Earls to build a 16-point lead going into the closing stages.

Academy centre Conor O’Brien’s classy solo try and energy around the pitch earned him the Guinness Man of the Match honours in Leinster’s 40-7 bonus point derby win over Ulster.

Andrew Porter’s try on the stroke of half-time gave Leinster a 26-7 lead, with his front row colleague Seán Cronin scoring twice inside the opening 12 minutes. Hooker Adam McBurney’s lone effort for Ulster was cancelled out by O’Brien’s fourth try in seven PRO14 games.

The home side took their match tally to six tries in the final seconds, debutant lock Oisín Dowling forcing a penalty at the breakdown and a further infringement gave their scrum the platform to drive forward and gain a penalty try from referee Andrew Brace. 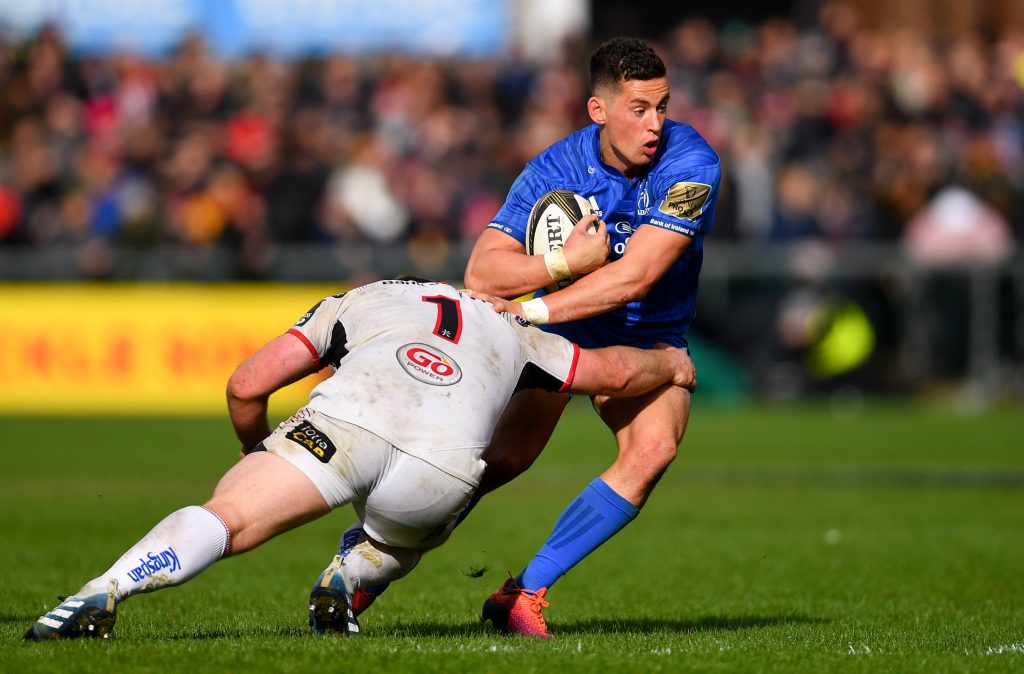 Tries from James Lowe and Barry Daly in the final quarter steered Leinster to a 22-17 victory over fast-finishing Scarlets at the RDS.

Rory O’Loughlin’s try in the final play of the first half gave Leinster a 10-0 lead at the break but Scarlets struck back to level the scores after the restart. However, the men in blue finished the stronger of the two to win by five.

Young back rower Max Deegan started and finished the try-scoring as Leinster had 16 points to spare at the end of an action-packed 10-try tussle with Zebre at Stadio Luigi Zaffanella in Viadana.

Academy lock Jack Dunne entered the fray to become Leinster’s latest senior debut, in a second half where three tries were needed from Leinster to pull away from a combatant Italian side.

Leinster secured top spot in Conference B and a home PRO14 semi-final with a 19-7 win over the Toyota Cheetahs in a rain-soaked Dublin on 1 March.

Rory O’Loughlin’s smartly-finished 55th-minute try from his own chip kick opened up a 12-point cushion following a close first half and that is how it stayed, their 15th victory in 17 rounds leaving the province a full 26 points clear of second-placed Benetton Rugby.

Leinster lost for only the third time in this season’s Guinness PRO14 as Edinburgh reeled off four tries to beat them 28-11 at BT Murrayfield.

Leading 14-11 at the break, Edinburgh hooker Ross Ford barged over in the 45th minute after a tight call at the breakdown saw Dan Leavy sin-binned.

Another ground-gaining series of pick and drives led to Fijian number 8 Bill Mata bagging the bonus point on the hour mark. Leo Cullen’s much-changed side was unable to add to Cronin’s initial try and two Frawley penalties.

A young Leinster squad with an average age of 25 played out an entertaining 27-all draw with Benetton Rugby, who finished level thanks to Tommaso Allan’s conversion of Fijian winger Iliesa Ratuva’s last-minute try.

Benetton were enjoying a 13-6 lead at the end of a first half where Leinster lost both Noel Reid and Mick Kearney to injury.

An impressive Glasgow Warriors left the RDS with maximum points to restore their position at the top of Conference A.

Leinster looked set for a hard-fought win when the Rob and Dave Kearney struck for their second try each in the third quarter, but Glasgow had their own set of clinical siblings with Matt and Zander Fagerson both touching down before Horne had the final say.

Leinster were pipped by provincial rivals Ulster 14-13 at Kingspan Stadium where Leo Cullen gave Ross Byrne the honour of captaining the province for the first time as well as presenting a debut to Academy lock Ryan Baird in the second half.

Ulster debutant Marcus Rea drove over in the 60th minute for the only score of the second half sealing a single point victory for the northern province.

Leinster qualified for the Guinness PRO14 Final in Celtic Park with a hard-fought 24-9 victory over Munster, bouncing back from the disappointment of the previous week’s Champions Final defeat to Saracens.

The last interprovincial derby of the season was finely balanced at half-time, Byrne’s final kick giving the hosts a 9-6 lead despite losing winger Lowe to the sin-bin. Joey Carbery landed two first-half penalties to Byrne’s three.

Second half tries from Seán Cronin and James Lowe – coupled with Ross Byrne’s 14 points from the tee – eventually ended Munster’s hopes at the penultimate stage for the second successive year.

Leinster were crowned back-to-back winners of the Guinness PRO14 after an 18-15 victory over Glasgow Warriors at the home of Celtic FC.

Captain Johnny Sexton added to his first-half penalty with a 51st-minute strike while Glasgow centre Kyle Steyn was in the sin-bin. Rob Kearney also saw yellow during the final quarter, and although the Warriors hit back with a Grant Stewart try with six minutes left, Leinster’s workhorse pack sealed the deal with an impressive late spell of ball retention.