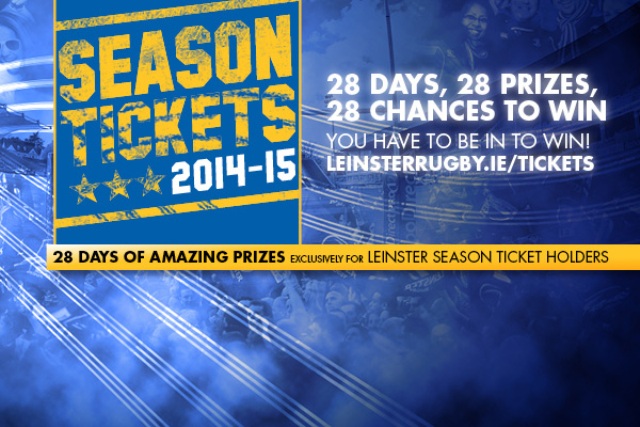 On Tuesday, Leinster Rugby launched an amazing 28 Day Giveaway for Season Ticket holders, with some great prizes on offer for people that renew and purchase their Season Tickets in the next 28 days.

The prize for day one was a Corporate Box in the Aviva Stadium for a Leinster game next season.

The winner, chosen at random from everyone that renewed their Season Ticket on the first day (March 18th), was Paul O’Brien, a resident of Swords, Co. Dublin.

Paul is Terrace Season Ticket holder and renewed his ticket for the upcoming 2014/15 season.

With the Leinster v Munster match in the Aviva coming up on March 29th, Paul was very much looking forward to the game and taking a look at some of the Boxes that he may be watching Leinster from with 11 friends next season.

“I’m really looking forward to the Munster match,” he said, when told of his big win.

“I’ll be looking at the boxes to see what my view will be like! I can’t wait to support the team from a Corporate Box in the Aviva!”

You could be a winner too!

There are still 27 prizes to be won over the next 27 days in the Season Ticket Giveaway!

The next 13 days are exclusive to current Season Ticket holders that are renewing their ticket, with the competition open to those purchasing Season Tickets from April 1st.

The sooner you enter, the better chance you have of winning as your entry rolls over into every day until you win or we run out of prizes!

Click here to see the amazing prizes on offer in the 28 Day Giveaway, including a chance to be in next season’s squad photo and some great vouchers from Life Style Sports worth €;500!