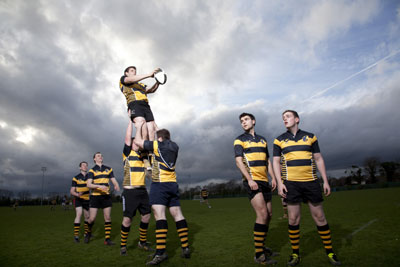 There will be a momentous occasion this Saturday when the Ulster Bank League comes to Maynooth, Co. Kildare for the very first time…

The All Ireland league game will coincide with a family fun day at the University’s North campus from 12 noon until 3 pm.

Barnhall RFC was founded in 1969 and is rightly proud of its rise through the ranks of Leinster and Irish rugby. This latest initiative has seen the club officially amalgamate with the National University of Ireland, Maynooth and is the inaugural season for NUIM-Barnhall RFC.

There are currently 24 rugby players on scholarship at NUI Maynooth, 8 of which will be members of the NUIM-Barnhall first team squad for Saturday’s All Ireland League encounter against Instonians (KO: 2.30pm).

NUIM-Barnhall have made great strides this season with a very young team and they aim to increase their scholarship quota to 40 for next season and push for promotion out of division 2 B.

For more information on the scholarships, please contact the University’s Rugby Development Officer, Dennis Bowes on 01-6246189 or Dennis.Bowes@NUIM.IE