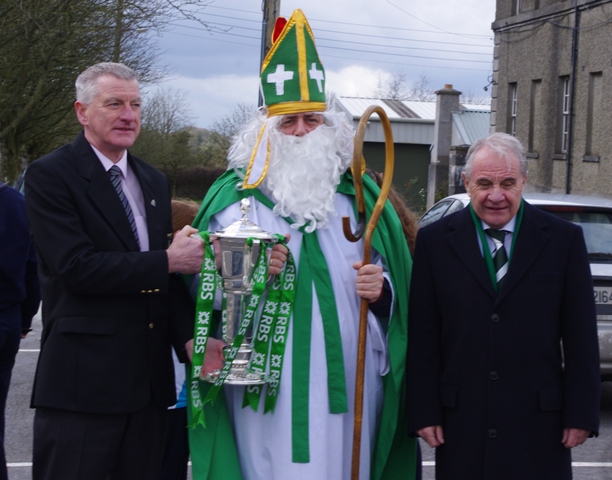 Pat Fitzgerald, President of IRFU and member of Longford Rugby Club, was given the honour of being Grand Marshall of the Longford St. Patrick’s Day parade…

Pat, accompanied by his wife Ann, arrived in Longford with the RBS 6 Nations trophy in hand less than 48 hours after the success of the Irish team in Paris.

When word of the 6 Nations Trophy visit got out Longford quickly became the envy of every city and town in the country.

To add to the occasion, Longford also had the three Leinster trophies from last season with the Amlin Trophy, RaboDirect PRO 12 Trophy and British & Irish Cup also taking their place in the parade.

The presence of the trophy in Longford on its first public appearance following the Championship success created a great stir and was undoubtedly the main attraction in the parade.

Following the parade Pat accompanied by Club President Tony Headon spent over four hours between the Longford Arms Hotel and the Longford Rugby Club giving an opportunity to Irish Supporters of all ages from 8 weeks to eighty a chance to have their picture taken with the trophy,with social media these pictures quickly made their way around the world.

Hundreds of people passed through the two venues with thousands of photographs being taken which will be cherished by all for years to come.