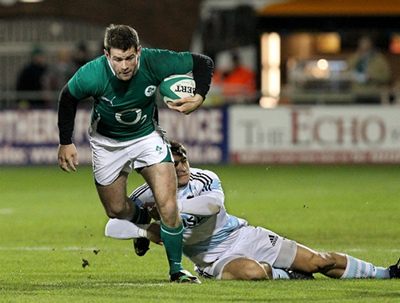 With Ireland opening the Championship against Italy in Croke Park on Saturday, 6th February and two international A games in quick succession against England Saxons (January 31) and Scotland A in Ravenhill (February 5), the squad reflects the competitive fixtures for Ireland over the next three weeks.

This squad will train together in Limerick next week before an A squad is named on January 26 ahead of the away fixture against the England Saxons in Bath. Additional players outside of the 44 man squad named today will be added to the A squad from which the team to play the England Saxons will be named.

Overall the squad contains nine uncapped players, with Dan Tuohy and Declan Fitzpatrick the newest members to the squad for this season. Elsewhere in the forwards, Rory Best returns to the squad after resuming contact training as does Marcus Horan after his injury layoff.

Shane Jennings is named in the squad after his return to playing to increase the competition for places in the backrow with his Leinster team mates Jamie Heaslip, Sean O’Brien, Kevin McLaughlin as well as Chris Henry, David Wallace and Stephen Ferris.

In the backs, there is an equal amount of competition at scrumhalf with Peter Stringer, Isaac Boss, Tomas O’Leary and Eoin Reddan all included. The wing positions also show Denis Hurley, Andrew Trimble, Shane Horgan, Tommy Bowe, Johne Murphy, Ian Dowling and Keith Earls all named in the squad and competing for a starting spot against Italy.

Ireland Coach Declan Kidney said, ‘When naming the squad, we had three main considerations, with the most important being the opening game against Italy, followed by the A games and further down the line with the Rugby World Cup. Building a squad has always been a priority for us and the work done during the first half of the season means there is a little more experience accumulated in the squad then we had a couple of months ago.’

‘While there were new players who gained vital experience during the Guinness Series, the goal is to keep that experience ticking over with all the players who need international level game time. By having the A games early, it allows us to get people on the pitch so they can keep their own performance levels up as we progress through to the later stages of the championship.’

‘The aim is now to continue that while trying to increase the competitiveness that we need for the Italy game. The provinces have all been in good form, making selection even more competitive, but we will need that for the big challenges that are ahead for the group over the next couple of weeks. The focus is very much on our game against Italy in a fortnight’s time and we are preparing for that first challenge’.