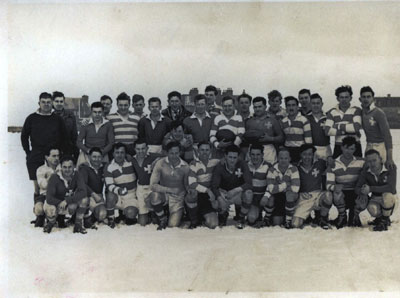 Fixture records will show that this fixture is the longest running and continuous fixture between an Irish and Scottish Club.

The first match was held in Skerries on 23 February 1952. Nearly 60 years on, the fixture still throws up the rivalry on the pitch and many friendships off the pitch. The late and very well respected Sandy Heffernan who was very much a proud advisory of this connection and fixture would be very happy with its continuous association.

Dunbar in Scotland resembles the town of Skerries, twenty miles south of Edinburgh on the North Sea coastline. The early matches were played in Winterfield, a small but elegant clubhouse looking onto the North Sea and with its similarities to Skerries on a wet and windy day. Dunbar has since moved to new a new Clubhouse at Hall Hill which they share with their hockey and soccer counterparts.

Considered as one of the last amateur bastions when a Club organises its members to travel to Dunbar and participate in the Classic Club Tour, play your match and then acquaint yourself with the best Scottish hospitality for the remainder of the weekend.

One hopes that the fixture will continue and flourish as an annual celebration of sport in general, of rugby in particular and of OUR common Celtic roots.