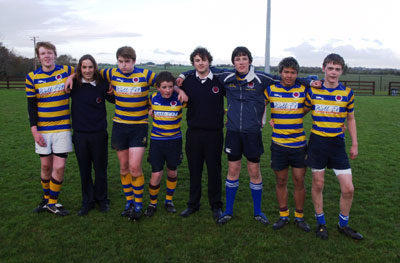 Gerry commenced in the role in 2007 and this year’s Skerries Community College Junior Cup team, which has qualified for the final of Section ‘A’ trophy, includes in its panel eight players who first experienced rugby in the local schoolyards.

While much of the credit goes to Paddy Connolly, their coach at Skerries Community College, Gerry believes that their development is also down to their late arrival to the game.

“This group share a willingness to learn and are perhaps more adept at playing spontaneous rugby”, McCleery says.

“Not only have they started to make their mark at a local level but one of the group, Paul O’Connor, has been called up by the North East development squad where he is joined by another player, Milo McCarthy, who also started with tag rugby.

“I am delighted, not only at their progress, but the fact some of these players came from three of my National Schools with no rugby background.”

Furthermore, the club has signed up 33 new players from Under-8 to Under-12 levels since registration day in August. It’s proof, indeed, that the Leinster Branch commitment to youth is paying dividends.