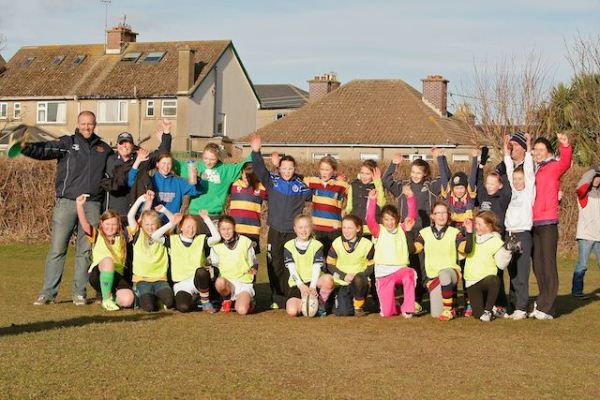 Skerries were led onto the pitch by team mascots Orla and Eimear Mcgirl 2 of the up and coming stars of Skerries RFC.

Last November Skerries RFC decided to put a lot of time and effort into developing girl’s rugby at the club. Straight away there was a lot of interest shown by some of the parents and friends to get involved, with 3 of our lady coaches going on to attend a mini’s course held by the leinster branch held in Westmenstown, Paula Murphy, Donna Griffen and Liz Healy have now become the backbone of the girls rugby in the club, said Michael Woods Skerries CRO.

The girls have been training nearly every Saturday with numbers growing, great to see new faces in the club.

Last Saturday the girls were asked to play a exhibition match at half time of Skerries V Sundayswell , which certainly kept the attention of the spectators. Undaunted by the sizeable crowd the girls aged between 9 and 12, twenty in total put on a great display of skills and understanding of the game, with their handling and movement and above all enthusiasm which is a credit to them and their coaches, perhaps history in the making.

A very big thank you to Paula Murphy, Donna Griffen, Liz Healy, Joe May and Sean Kilbride who made the day a great success.

Also I would like to congratulate the under 16 girls from Skerries and Westmenstown, on their performance last Friday night in the RDS against Navan.