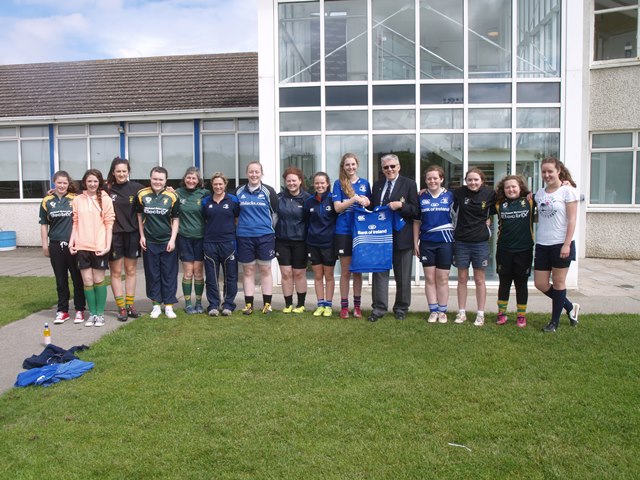 The newly formed Skerries Under 16 team played their final fixture of the year against another fledgling side, Boyne RFC…

As this fixture brought together some 20 girls keen to develop their skills it was seen as an ideal opportunity for Leinster Rugby’s Womens Development Officer, Jennie Bagnall, to deliver a coaching session to the players prior to the match.

‘As quite a number of the girls had signed up for the Leinster Rugby Girls School of Excellence(Kings Hospital 21st-25th July, see website for details) it was nice to reward their enthusiasm with some coaching’ said Jennie after a session that progressed from handing to full on tackling activities.

The event also gave Skerries girls an opportunity to express their thanks to the club for the use of their facilities and they were able to somewhat repay this by presenting a signed Leinster shirt to the Club President, Paschal Byrne. In accepting their kind gesture Paschal reiterated the Clubs commitment to the women’s side of the Club. The jersey is ear marked as a raffle prize in conjunction with the Club’s ‘Strictly Come Dancing’ event being held in June and will help raise much needed funds towards the running of the Clubs underage rugby.