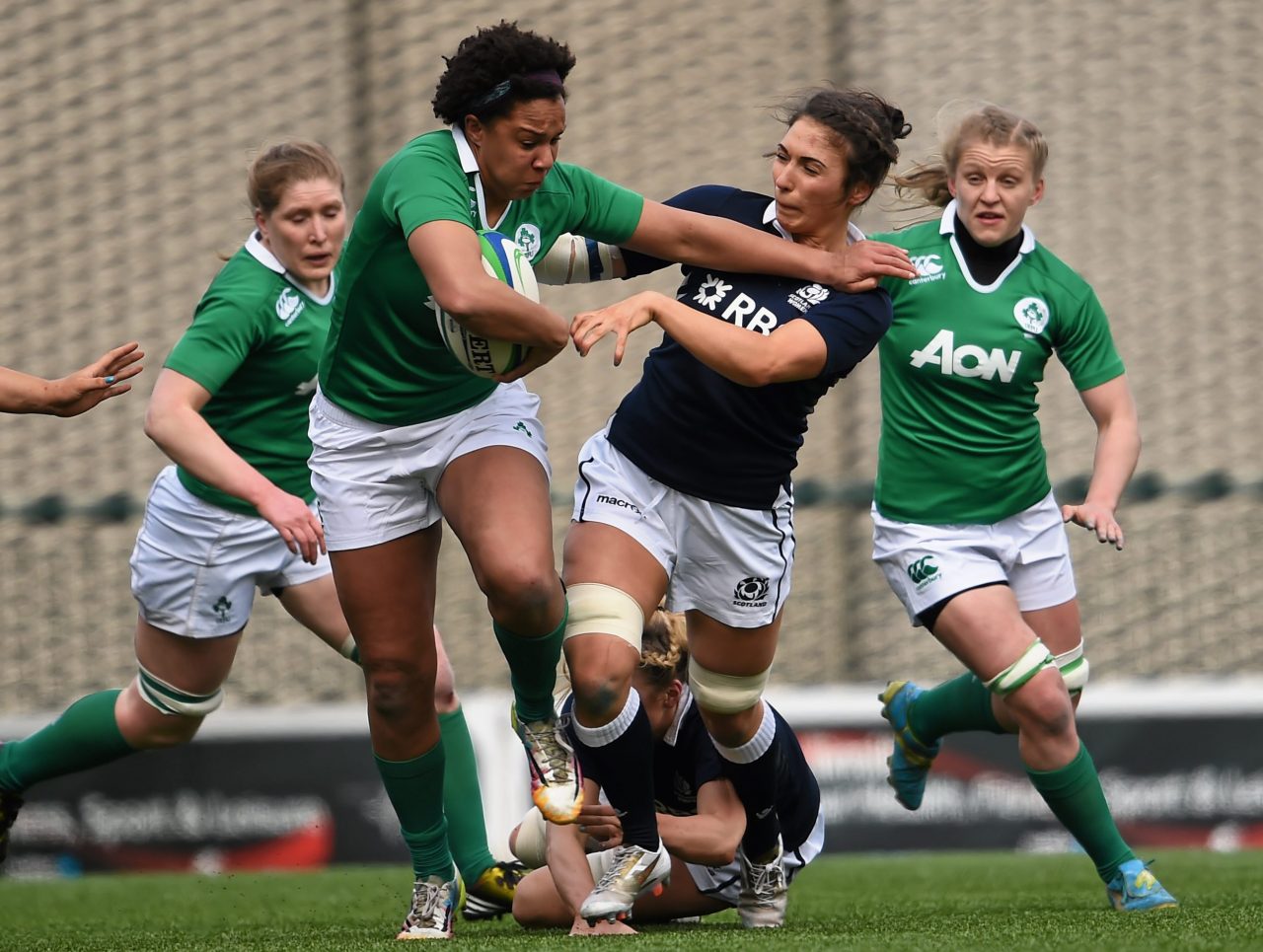 Sophie Spence was named Women’s Player of the Year at the Guinness Rugby Writers of Ireland Awards on Tuesday evening after an impressive year in the second row for her country.

The Old Belvedere and Leinster player played an integral role in the Women’s national side winning the Women’s 6 Nations title last season.

On receiving the award, Spence said: “It’s something you can only dream of. I didn’t think I had my best performances this year, but I really enjoyed it and it’s come as a big surprise when I see the other players who have won it like Claire Molloy, Lynne Cantwell and Niamh Briggs, so it’s fantastic.

“It’s nice to see our forwards getting the recognition too! Our pack has had a lot of continuity in the past season which helped us deliver real consistency so this award is as much about the forwards as anything else.”

Lansdowne FC was voted Club of the Year after an impressive season at all levels culminating in winning All Ireland League Division 1A as they beat last season’s winners Clontarf by a single point in a pulsating final at the Aviva Stadium.

Ireland captain Paul O’Connell was named the Guinness Rugby Writers of Ireland Player of the Year at the annual ceremony, which was hosted by Rory Sheridan of Guinness, Damien O’Meara and Michael Corcoran, Chairman of the Rugby Writers of Ireland. Sheridan, who is Head of Sponsorship for Diageo, Western Europe, said: “Guinness are delighted to support the Rugby Writers of Ireland and help them host these awards each year. “It’s been another brilliant year for Irish rugby, with both the Irish Men’s and Women’s teams claiming their respective RBS 6 Nations titles, an outstanding achievement by both sides. The awards serve as a great opportunity to acknowledge those in Irish rugby who are giving so much to the game.” O’Connell was delighted to receive the accolade which was voted for by the Irish rugby media. “It’s a great honour. I’m delighted to receive it, we had a very successful season with Ireland winning the Championship, so I suppose I’m capitalising on a lot of other people’s hard work,” he admitted. “There’s a lot of very clever rugby people writing about the game in Ireland and I’ve been at the awards night as Irish captain and as a winner before and it’s a great night. We’re delighted with their support and I’m delighted with the award.” The Limerick man was outstanding for his country last season, and his efforts along with the rest of the squad resulted in Ireland being awarded the Dave Guiney Team of the Year after claiming back-to-back RBS 6 Nations titles last March.

Fred Casey was honoured with the Tom Rooney award on the night. He has been involved in Cork Constitution since 1964 and has been credited with the development of sixteen Ireland Internationals and four British & Irish Lions. Fred has also coached a huge number of current and former Munster players.

There were two players inducted into the Hall of Fame on the night. Tom Grace won 25 Ireland caps between 1972 and 1978, including eight as captain. He led Ireland on the tour to New Zealand and Fiji in 1976 as well as gaining Lions selection on the most celebrated tour of all to South Africa in 1974 where he scored 52 points and made 11 appearances.

Dave Hewitt was capped 18 times for Ireland (during which time he scored one try, two conversions and three penalties), and played in six Test matches while on tour with the Lions to Australia and New Zealand in 1959, and South Africa in 1962. His personal points tally for the New Zealand matches came to 112.

PLAYER OF THE YEAR – PAUL O’CONNELL

Paul O’Connell collected the Guinness Rugby Writers Player of the Year award for the second time in his career, having previously been awarded it in 2006. The Ireland captain led by example during the RBS 6 Nations and he performed admirably throughout the tournament, with the Limerick man even managing to grab a try during the final day 40-10 victory against Scotland.

The Ireland team were awarded the Dave Guiney Team of the Year award in recognition of a stellar RBS 6 Nations campaign which saw them claim their third Championship of the professional era.

The Ireland team recorded opening victories over Italy, France and England, before losing to Wales, which set up an epic final day of the tournament that saw Ireland claim the title after beating Scotland 40-10.

From 1964 onwards, Fred has been the inspirational force behind the Cork Constitution ‘Conettes’ (the Cork Con underage section). Over the years he has been involved with the club, he has spent countless hours organising matches and training session for the youngsters.

Fred has seen many of the players that have come through the Conettes go on to play senior rugby for Cork Constitution, Munster, Ireland and the British & Irish Lions. Some of the players he has coached include Ronan O’Gara, Peter Stringer, Peter O’Mahony, Ralph Keyes, David Corkery, Mick O’Driscoll, Frankie Sheahan and Michael Bradley.

Educated at Pres Glasthule and Newbridge College, Tom Grace went on to play for UCD before joining St. Mary’s College in an honour-filled career. He won his first cap on the wing against France at Stade Colombes in 1972 in a rare Irish victory on French soil.

The most competitive of wings, he was capped 25 times by Ireland, including eight as captain. He is also the current Honorary Treasurer of the IRFU and is Chairman of the British & Irish Lions Board.

David Hewitt played his domestic rugby for Queen’s University and then Instonians. While still at school, he played for the Ulster senior team, and at the age of 19 played for Ireland against Australia alongside fellow Queen’s graduates, Jack Kyle and Noel Henderson.

Hewitt gained 18 caps for Ireland and played in six Lions Test matches in Australia and New Zealand. His father Tom and his uncles, Frank and Victor, also played for Ireland. David is considered by many to have been, on his day, one of the best centres of all-time.

Sophie Spence plays her club rugby with Old Belvedere and with Leinster at provincial level. Originally from South Shields in England, Spence helped Ireland claim victory in the 2015 Women’s RBS 6 Nations with her impressive open field running and ball retention at the line out.
The former netball player was also part of the side that claimed victory over New Zealand in the 2014 Women’s World Cup and she also holds a second RBS 6 Nations winners’ medal from 2013.

CLUB OF THE YEAR – LANSDOWNE FC

Lansdowne FC was founded in 1872 by Henry WD Dunlop. Steeped in the history of the game, the club is one of the oldest rugby clubs in Ireland as well as the one of the best known wherever the game is played.

In 2014/15, just a single point separated Lansdowne and Clontarf at the end of a pulsating Ulster Bank League final as Mike Ruddock’s men picked up their second Division 1A crown in three years. The club was also very successful at junior level, where they won a number of trophies across Leinster last season.