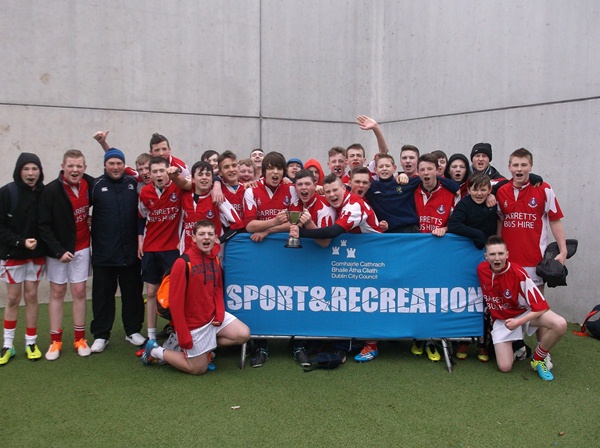 The conditions made them games tightly contested affairs with all four sides having to deal with strong winds. The curtain raiser for finals day was the Shield game. St Kevin’s flew out of the blocks with two early tries which rocked St Josephs. Although the boys from Fairview never stopped, St. Kevin’s were too strong on the day and with St Joseph’s trying to get back into the match, their Finglas counterparts pounced on a couple of mistakes to run in a couple more tries. A score line that did not reflect the contest, which saw St Kevin’s lift the inaugural DCC Shield.

The Cup final saw the two strongest team in this year’s competition fight it out for the chance to get the hands on some silverware. With both sides having players in their ranks that represented the Dublinia XV last year this was going to be an evenly contested encounter. St David’s started the stronger of the two sides with St James struggling to deal with the physicality of the Artane pack. The St David’s number 8 ran in two early tries before the boys from St James started to grow into the game.

As the first half came to a close both sides were found guilty of not taken their chances of adding to the scoreboard. With strong messages from both sets of coaches, the two sides took to the field knowing the next score was vital. This proved to be the case with another line break by the St. David’s No 8 were he had enough paces to make the line. On the day the St David’s pack had just too much for St James’s boys who tackled everything and were unlucky on the day. Final score: 22-5.

All the players are now looking forward to the DCC team programme; this is a new scheme were a DCC North selection taken on the DCC South selection. They players then will be enter into a selection process to make the DCC squad who will take on a well-known established rugby playing school in Dublin and hopefully take on the equivalent program from Ulster.