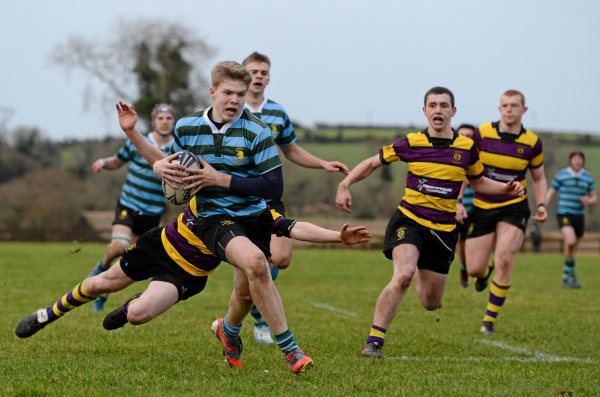 During a mild afternoon on the 23rd of January, St. Gerard’s School faced the daunting task of playing CBS Wexford in the semi-final of the Vinnie Murray Cup. The two teams warmed up for the match down in Wicklow Rugby Club where the game was to be played, while the fans gathered around pitchside eager to watch what promised to be a spectacular game of rugby.

Once the scrumcaps were fastened and the shoulders stretched, each team gathered into their respective huddles, psyching up for the brutality which was to soon follow. There was a deathly silence as Tommy Whittle, the number 10 for St. Gerard’s, weighed up his options, ready to boot the ball in the air for the first time. Up it went and the match was underway.

It turned out that kicking was to be a tactic used by both teams to try to exploit the areas out wide, a theme that continued from the 1st to the 70th minute. A kick up field, as it so happened, led to the first try for CBS Wexford who opened the scoring around 10 minutes into the game, but the conversion was pulled slightly to the left of the sticks.

The penalty count was low in the first half, which both benches seemed content about, and it was indeed from open play that St. Gerard’s retaliated with an impressive try. The breakaway started just shy of the CBS half as Kyle McCarthy, the number 9, broke a few tackles before offloading it to Niall Byrne. With the ball passing through the hands until it found Mark Gallagher who leapt over the line.

The action didn’t stop there though as after numerous phases of crunching tackles and possession deciding rucks, Wexford were in for their second try after a very impressive rolling maul, which was converted with perfect precision.

The pressure was now on St. Gerard’s to see if they could respond to falling behind once again. They certainly seemed up for the task straight from the restart as some breakaways would have succeeded had it not been for some well-timed tackles and unforced errors approaching the 22.

The sheer brute force of the forwards finally paid dividends for Gerard’s as Jack Dooley crashed over the line, giving Tommy Whittle the chance to even the scores up. After a long period of silence and spectators anxiously holding their breath, the kick was taken and narrowly missed, sailing an inch the wrong side of the post. The score was still in Wexfords favour at 12-10 as the referee blew for half time.

As both sides gathered their thoughts and the subs bench had been put to use, the second half was underway. Both teams were eager to keep possession but kicking was still put to good use as Mark Prendergast experimented with a few Garryowens for St. Gerard’s and the CBS backs constantly trying to kick for territory, and touch.

After what seemed like hours of non-stop attack from Gerard’s, the push was finally on for the line. All 16 forwards piled themselves into the maul, Gerard’s trying to force the ball over the line while their opponents were putting bodies in trying to stop the oncoming bulldozer. The maul eventually collapsed, leading to a penalty try for St. Gerard’s with Donal Smith, the No. 7 doing most of the drive. The score was swinging in favour of St. Gerard’s at this stage, even more so when Whittle finally found his kicking boots and smashed the ball through the posts. 17-12 St. Gerard’s. Game on.

With the tables turned, the onus was on CBS to pick up the pace and fight their way back into the game. It all proved a bit too much for them though as fatigue was beginning to show and it seemed only a matter of time before Gerard’s crossed the line to seal the deal. CBS were desperately looking for some type of lifeline back into the game which resulted in a lot of kicking, which left them exposed at the back. It was this exposure that turned out to be their undoing though as Mark Prendergast leapt into the air to catch the ball, off-loaded it to Rob Toal Lennon who after a blistering run found Adam Simmonds who sprinted over the line, happy to put this game to bed. After another successful conversion and the score 24-12 in favour of St. Gerard’s. After an enthralling and nail-biting end to the game the whistle blew, job done.