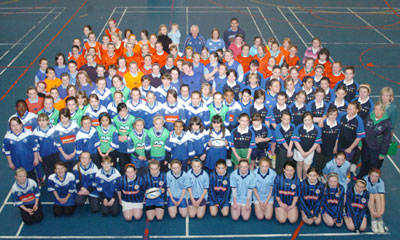 Pupils attended from schools including; Scoil Mhuire Coolcotts, Screen, Curracloe, Kilmore, Rosslare and Crossabeg. The girls competed in a marvellous competition given the opportunity to participate at their own separate level.

Following the huge demand for girls rugby nationwide at all levels, both adult and youth, this was a great opportunity for the girls to experience friendly competition in tag rugby- the non-contact sport. There were no winners on the day.

Each girl received a token gift from Leinster Rugby and full marks to the schools involved for participating in the Leinster Rugby Schools Rugby programme for the year.

Also the annual rugby blitz will take place at the end of the school year. Local Leinster Rugby CCRO Noel Ferguson coaches up to 1,500 pupils weekly in tag rugby and up to 50% of these are girls. Their is a need and a right for any of the girls to play rugby at club level if they want to do so and moves are in place to see this happen in Wexford and in other clubs around the country.

To get the show on the road a number of events are planned at Wexford Wanderers RFC namely:

Monday night Tag rugby for adults and children from 16th May onwards (from 7pm) weekly.

Summer Camps run by Leinster Branch at Park Lane from July 4th until 8th from 9.30am to 1.30pm. Book today on www.leinsterrugby.ie/summercamps

For any information on any of the above please contact Noel Ferguson on 087-2035026.