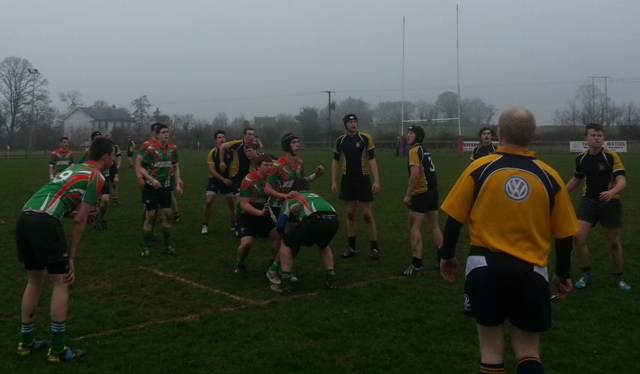 On a foggy day in Cill Dara RFC, St. Kevin’s Dunlavin faced PBS Newbridge in their first ever final, despite rugby only being played in the school for two years…

Both teams were well supported on either side of the pitch with around one hundred supporters there to get behind each school.

The Kildare school started the stronger of the two with some good running from their outside centre and a pack that was able to retain the ball well through the phases. St. Kevin’s took a while to settle into the game compared to their well experienced opponents. At half time the score was 17-3 in favor of PBS, with the Kildare men having scored three tries and converting one, to St. Kevin’s one penalty by Eoin Murtagh.

In the end, the Newbridge team held solid and retained the cup they won last year. The final score was 24-11 with Brian Miley getting over the try line for St. Kevin’s in the second half.

The Dunlavin lads can be proud of their achievement and this will only spur them on to come back stronger.