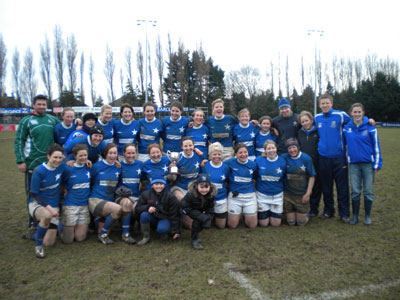 St. Mary’s College will, this weekend, continue their bid to retain the Paul Flood Cup, which they won in the inaugural competition last year. This Cup holds a special place in the hearts of all in St. Mary’s as ‘Floody’ continues to be missed…

On Sunday, they face old rivals Navan RFC in their second match (KO: 1pm), after overcoming Trinity away in their first game of the 2011 competition. This is sure to be a tough match as previous Division One side Navan, are currently in excellent form in Division Two.

Paul Flood took a keen interest in the development of women’s rugby in St. Mary’s by helping out in whatever manner he could before assuming the mantle of coach when the call came. He fulfilled that role with the same enthusiasm he put into every other aspect of his rugby career and he was a strong advocate and promoter in improving the facilities, administration and coaching/training support for the women’s game. He was dedicated to his squad and believed in trying to ensure that all members got their share of ‘game time’.

Under his guidance St. Mary’s women’s team made tremendous strides reaching the All-Ireland Women’s League Division 2 semi final in the year of his passing, 2008, and going on from that to achieve success in the same competition the following year. Paul also guided the team to the 2008 All Ireland Bowl Final against UL and although defeated, Mary’s put up a storming performance against the AIL Champions.

Paul was immensely proud of the success and achievement of the team and the memories of the day and celebrations with Paul will be forever cherished by the women’s team. He was highly respected by opposing teams his passion for the game still remains as an inspiration to those members of the squad who served under him. They and the Club will forever be grateful to Paul for his input.

All support welcome in Templeville Road this Sunday for a 1pm kick off between St. Mary’s College and Navan.