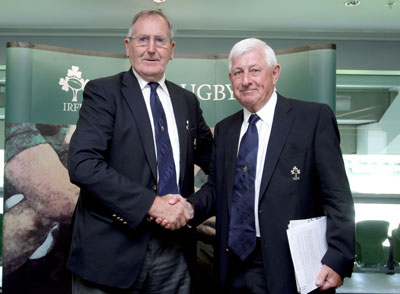 John Hussey was ceremoniously installed at the AGM of the Irish Rugby Football Union (IRFU), as the President of the IRFU on 22nd July…

The outgoing president, Caleb Powell, expressed his true happiness at John’s appointment and said that it has always been a joy to work with John, who has been involved in every development worth noting over the past number of years in the professional game.

In his acceptance address John thanked his colleagues from his club, St Mary’s College RFC, the Leinster Branch and IRFU, who supported him and made it all possible.  He thanked his wife Patricia and sons David and John Paul particularly, whose constant understanding and support, he said, were vital.

He has made the club very proud and indeed fulfilled, being the first IRFU president in our long proud history, spanning 111 years.  John joined St Mary’s College RFC in 1961 having attended school at St Mary’s College Rathmines, as had his two elder brothers who had preceded him into the club and had both won LSC medals in 1958 as the two flying wingers on Joe Fanagan’s famous side.

John himself was a fine winger and played for St Mary’s with distinction during the early 1960s.  Although he won two J2 medals during that time and was a member of the Leinster Junior team over two seasons, his playing career was curtailed due to recurring shoulder injuries.  He remained involved at the club and became a selector in the 1980s.

From 1998 to 2002 he was the chairman of provincial rugby and was chairman of the Celtic (later Magners) League between 2002 and 2009, where he guided it through its early fledgling stages and built it up, he was responsible for expanding the league to include two Italian sides.

During that time too, he was chairman of the Management Committee of the IRFU and oversaw the changes which led to the exhilarating Grand Slam of 2009.  He was actively involved in the development of the AVIVA stadium and a director of the AVIVA Stadium Company.

John has also been chairman of the IRFU Charitable Trust and remains a trustee thereof.

During all this time, he has continued his professional career and family commitments in an exemplary manner and has never lost sight of his core commitment to his club and fellow members and has always been available when needed.

Undoubtedly he has made an enviable contribution to Irish rugby and he has shown how deserving he is of the great honour now bestowed upon him by his IRFU peers.  Not only is this honour a mark of the great respect for John but also the result of the respect and appreciation built through the work of St Mary’s College RFC representatives who preceded him at the LB/IRFU.

Our president, John Gilsenan, and his committee take great pride in John’s elevation and look forward happily to a close association with him over his year as president.

Everyone in the club rejoices in John Hussey’s success, realising that it has an exceptionally worthy champion and all can share in his achievements.