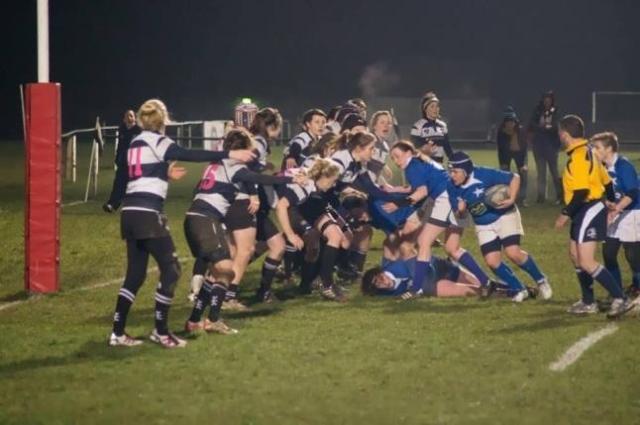 A brace of tries in the second half from Louise Kavanagh and Majella Cox booked St. Mary’splace in the Paul Cusack Cup final, but this was a terrific demonstration of collective will and spirit to reel in Belvedere’s first half lead.

Belvedere started brightly enough, kicking two penalty goals to lead 6 -3 after 30 minutes. Some very poor collective defending let Belvo’s number 13 Amy O’Connor in for an easy touchdown in the corner. However, from that moment on St. Mary’s took the game by the scruff of the neck and Belvo did not get a sniff of the whitewash again.

The second half witnessed great play from the Mary’s pack in the loose as Brigid Collins, Kathy Byrne and Jenny Miller punched holes in the Belvo defensive line. The scrum and lineout creaked in Belvo’s favour more times than not but it was not enough to keep the Mary’s women from securing good field position in the Belvo 22.

Scrum-half Louise Kavanagh made sure the Mary’s pack played with a high tempo and she was quick to spot a gap and exploit space. These breaks were well supported and Belvo found it difficult to make an impact at the breakdown. It was Kavanagh who posted the first comeback try, applying the finishing touches from some great grunt work in the pack. Brigid Collins ensured maximum points were notched up with a superb conversion to bring her team to within one point.

The Belvo backline continued to take their chances clinically with some impressive handling, but the Mary’s backs held firm in defence and in their resolve that there would be no further points for their hosts. Mary’s bided their time, enjoying the lion’s share of the territory.

Another quick tap and go in the dying minutes from the number 9 set up a series of rumbles to the Belvo line and some quick ball saw centre Majella Cox dot down. Belvo looked to muster a comeback with their try scorer O’Connor making a powerful break down the flank into the Mary’s 22 in the final minutes but she was expertly shepherded into touch by a team that had no intention of missing out on this year’s finale in Barnhall on March 29th.

St Mary’s College RFC club president Steven Hennessy and Director of Rugby Kevin Conboy were both present to witness the J1 team get their reward for a great season’s work.