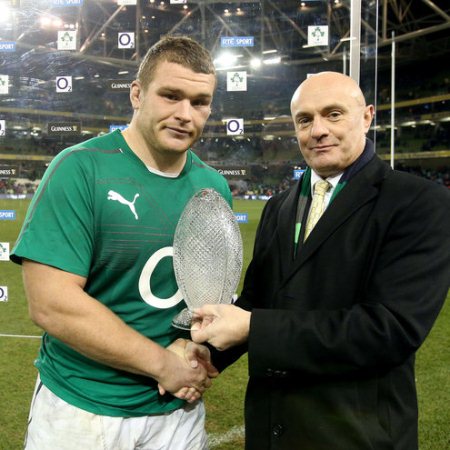 We have all read the fairy tale of Jack the giant killer and loved it so well, now we have a fairy tale come true, with our own Jack Mc Grath. Could anything be better, I doubt it, nor that any young man could deserve it more…

And what a marvellous debut he has just had awith man of the match performance, sweeping all aside in the scrum and loose, wining turnovers and driving on with awesome power. To think that Jack is only 24 years of age, which in prop terms it is extremely young; so much more to come. Of course there will be, as with everything in life, difficult times, but nobody is better prepared for those than Jack.

He is unusual in modern international rugby being a product of club rugby rather than exclusively rugby academy. He played as an U20 up through the ranks via J1s to senior.

Jack, at school in St Mary’s College Rathmines, had always been special in every way, quiet and composed, bright and brave. He was and is a friendly easy-going lad who wishes to help and support. He listened and learned academically and in rugby, where he excelled, listening and learning from his coaches Rodney O’Donnell and Dave Breslin, to whom he has remained close. He deservedly got every rugby honour the school game could give.

Then Jack came up to the club and has been exceptional in every way, like his immediate international predecessor the great Jonathan Sexton, he has unconditional love of his club and has played for St Marys whenever he was allowed, making outstanding contributions on each occasion.

It is easy to say how lucky he is, but few know how difficult the position he plays is and the enormous strain it is physically and mentally, especially at the international level. Nor indeed do may know the pain and strain of hours of hard driving training, gym work, field work, skills work, technique, team training and game planning to get there. Also the little deprivations such as celebrations after games won, social life restrictions, diets and many other areas of discipline, necessary.

He would freely admit to the major influence and guidance Peter Smyth and Hugh Hogan have been on and to his rugby development. Big Jack’s part in our ultimate success in AIL in 2012, cannot be overstated and none of us will forget how inconsolable he was, when prevented by protocol from playing in the final two games of that campaign. Nor will we forget his joy for his teammates and his club at the victory. He still comes up to the club frequently and I know how lucky he feels to have the support of his club, which he will have throughout his life, when many of the modern club less players will have no roots nor club pals to share social life with in latter years.

It is remarkable to note how many rugby internationals that have been produced by St Mary’s College and indeed the club. Relatively, they are both very small organisations and it is a credit to the dedication of those who spend their time freely in coaching and helping these young players in their career paths. For a great many years, Fr John Flavin indefatigably and patiently,
has helped coach and support teams and players at the college and he must be a truly proud man today.

In front row terms alone, starting with our first ever international from the club, great Lion, Sean Lynch, we have had Tom Feighery, Ciaran Fitzgerald and Emmet Byrne, with 26 others developed at St Marys, with a number of others who had been at the school or club prior to their international careers.

We all heartily rejoice at Jack’s deserved elevation and wish him success and happiness over many years to come both on and off the rugby field.

Thank you Jack for the joy you have given us. We look forward to much more…