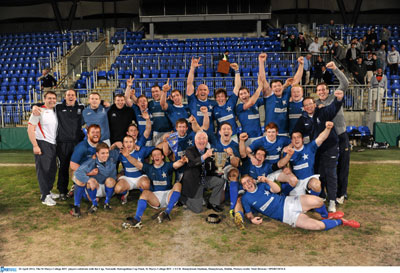 St Mary’s had the Belfield outfit on the back foot through an Ian O’Neill penalty after two minutes and the Templeogue men nudged further ahead when a rolling maul found captain Michael Donnellan who crash over at the bottom of the pile, with O’Neill missing the conversion.

Simon Gillespie opened the College account with a penalty but St Mary’s were dominant up front and broke through for a second try on the hour mark through flanker Gareth Austin.

Austin touched down after a series of close-in crashes and O’Neill converted to put 12 points between the sides.

Gillespie struck a further penalty from the tee for College, but it was to prove academic as Mary’s immediately regained the ascendancy.

Following a spell of pressure with four minutes remaining second-row Robert Fields barrelled over and O’Neill added the extras with the conversion.

Deep into stoppage time, full-back Paul Gillespie touched down to add another try to seal the coveted title for Mary’s.