St. Mary’s Women back on the pitch! 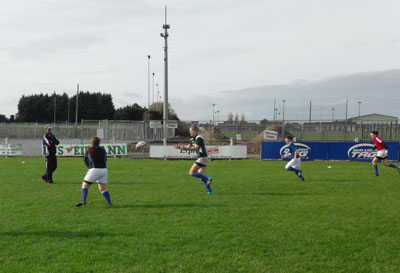 Like most sports teams in Ireland, St. Mary’s made their return to pitch based training this week after a long lay off due to the snow and the holiday season…

Despite a feeling of festivity still in the air it was straight down to business for the girls with some gruelling fitness work to try to work off all those mince pies scoffed over Christmas!

Nobody was complaining either with a big game this weekend at home to Highfield to prepare for. The girls will feel they didn’t do themselves justice during their last outing against the Corkonians and are hoping that unlike last time they won’t be too hard hit with injuries for this match.

The break did provide some players with time to recoup and others to recover from injuries, while a lucky few were training with the Ireland squad over Christmas. We hope to welcome some players back from injury if not this weekend then in the coming weeks. All have been sorely missed including those with longer term injuries but we look forward to having them all back as quickly as possible.

One sad note this week is the departure of one of the most loved members of the team, as winger Catriona White leaves us to embark on some travel and a new life in Australia. Despite only being in the team two seasons, she has made both a huge impact on the team and huge steps forward with her rugby having only played tag previously.

She will be sorely missed both on the pitch and on the dancefloor but we hope that Whitey will bring the free flowing rugby of St. Mary’s with her to Oz and we wish her all the best there!

The match against Highfield kicks off this Sunday in Templeville Road at 1pm.

Come down and cheer on the girls in blue!