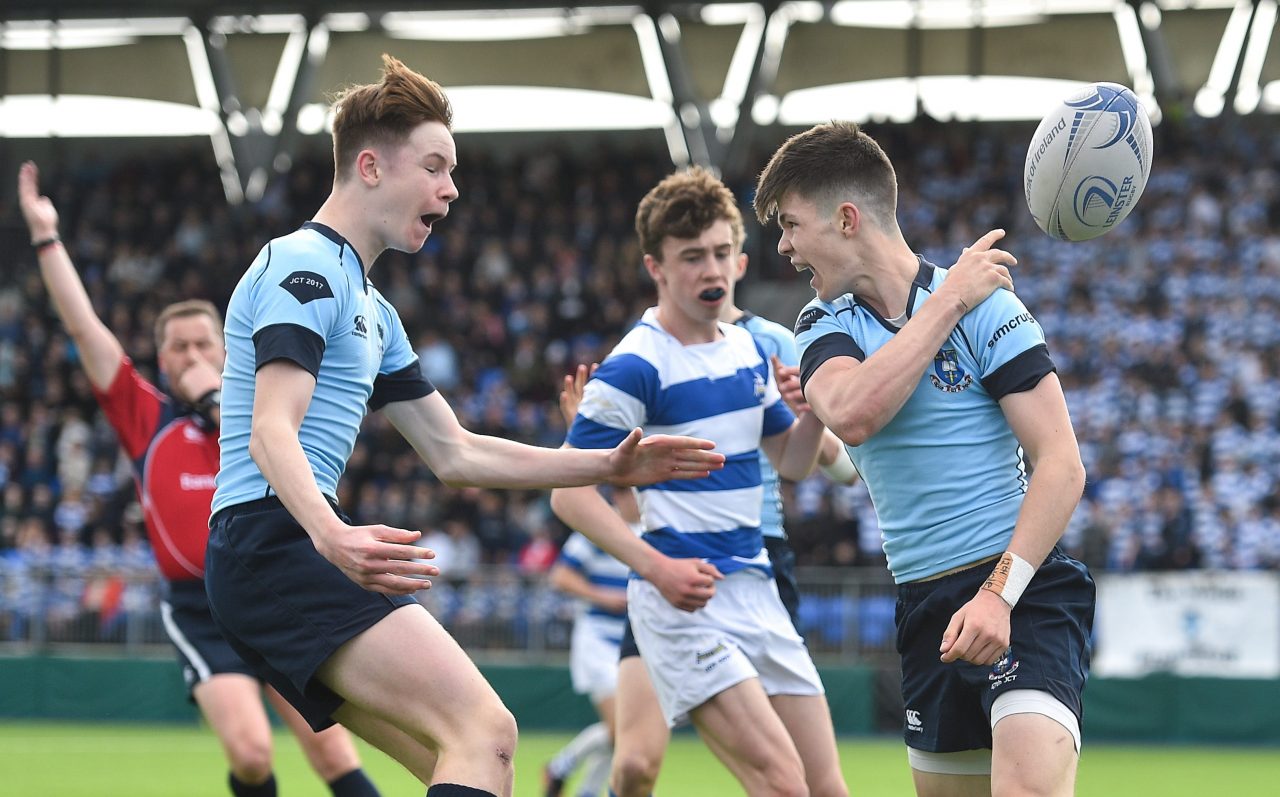 The electric atmosphere at this Junior Cup Final was accompanied by a firefighting start from St Michael’s as they had to defend close in and out wide.

When they got the chance to move from a high tackle on full-back Eddie Kelly, Chris Cosgrave surged left and their crisp passing soon put wing Zach Harrison one-on-one with full-back Shane Murray.

He kicked when he should have held onto the ball.

Blackrock punched it up and wing Michael Lowey cut a fine line. The ball was moved left where St Michael’s wing Simon O’Kelly hammered into centre Sam Small to shake the ball loose for a scrum.

The exchanges on the fringes were frighteningly physical, St Michael’s forcing a knock-on. From a scrum inside their own half, the ball was shifted right for Cosgrave to simply take off, chip Murray and collect on the far side for a stunning try.

He had the composure to convert from wide right for 7-0 in the 10th minute.

A turnover by flanker Hickey put the light blues in gear again, prop Lee Barron breaking a tackle and Cosgrave slashing through the middle.

Blackrock were using wing John Campbell to get over the gain-line from the scrum and Lowey was never too far away from the ball.

Their ingenuity was eye-catching, Lowey almost getting around Cosgrave and their forwards setting up a clever maul in midfield to draw a penalty and, almost more, as prop Scott Barron went within a foot of the line.

There was the consolation of Adam Dixon’s penalty to make it 7-3 in the 19th minute. They backed this up with strong carrying up the guts, a smart lineout and thrust from lock Mark Morrissey, destroyed by Jack Boyle’s superb poach.

St Michael’s moved with menace from the work of wing O’Kelly and full-back Eddie Kelly until stunted by a ‘Rock solid defence.

In return, the Williamstown school looked to their maul for profit and it was moving well when captain Hugh O’Malley gave away a needless penalty

Out of the blue, St Michael’s narrowed their focus to crank up the pick-and-go relentlessly for number eight Jack Boyle to blast to the line for 12-3 in the final minute of the first-half.

There was a frantic re-opening as Blackrock came calling, wing Lowey taken down by Kelly and scrum-half Jeffrey Woods launching the ball forward for a footrace. It was good enough for a St Michael’s lineout which Kelly threatened to turn into five points were it not for the vigilance of Campbell.

‘Rock centre Small almost got away down the right and wing Lowey had to be cut down by Kelly again.

St Michael’s couldn’t escape and their eagerness to rush up in defence onto Dixon cost them a penalty, but not the points.

Then, the winners simply moved into top gear as they took the ball through three phases and the best part of 60 metres for out-half Niall Carroll to finish into the left corner.

Cosgrave converted from the touchline for 19-3 in the 44th minute. When ‘Rock pushed the passes, Hickey picked one off, replacement Hugo McWade was in support and Cosgrave took it home ahead of his conversion.

‘Rock were not going to roll over and they rebounded in direct fashion, their number eight Liam Heylin somehow managing to ground the ball for replacement Michael Moloney to convert in the 50th minute.

Full-back Kelly’s well-judged kick and Lee Barron’s rescue of an overthrown lineout put St Michael’s back on the front foot for Harrison to cut back against the grain for their fifth try.

The game concluded with Blackrock applying sustained pressure to create space on the left for replacement Seb Lowe to exploit, Moloney converting as the final whistle sounded.