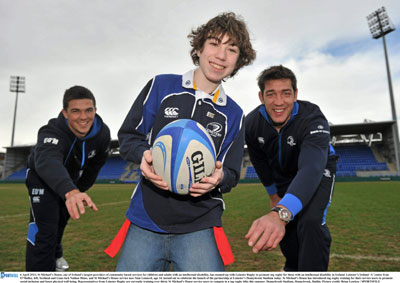 Service Users from St Michael’s House, one of Ireland’s largest providers of community based services for children and adults with an intellectual disability, will be representing Leinster in an international Tag Rugby tournament in Belfast…

The tournament will take place on Saturday 11th June, where teams will be visiting from England, Scotland and Wales to play Irish teams from both the North and South. There are 27 teams in total taking part, and the St Michael’s House team will be one of two teams representing Leinster in the league.

The children on the St Michael’s House team are aged between 15-18 and attend St Michael’s House schools in Raheny and Ballymun. They include Dean Cobbe, Dean McLoughlin and Conor Sorahan from Coolock; Aaron Whelan from Clonshaugh; David McGinn from Clontarf; Dale Blount from Drumcondra; Bridgietta Spiridaki  from Finglas; and Robyn O’Shea from Glasnevin.

Barbara Wiseman, Head of Fundraising, St Michael’s House, commented: “Earlier this year St Michael’s House teamed-up with Leinster Rugby to further the development of tag rugby for those with an intellectual disability in Ireland. All our coaches have been trained by Leinster Rugby, and have introduced this training programme in our schools. This is the first time St Michael’s House service users will compete in an international rugby sporting event. We are extremely proud of all the players on the team and wish them the best of luck in the league!”

Meanwhile, St Vincent’s Tag Rugby Club will also be taking part in the International Tag Rugby Festival in Belfast with their very special group of people with intellectual disabilities who attend St Vincent’s Centre on the Navan Road which is run by the Sisters of Charity.

They are also teamed up during the season with Coolmine RFC who provide them with use of their facilities for team training and support. St Vincent’s have been regular participants in the International Tag Rugby Festivals in recent years and are delighted that St Michael’s House are participating for the first time this year bringing a strong representation from Leinster to the festival.

Both teams took part recently in the RDS at a half-time Magners League match and Leinster are delighted to wish both teams well.