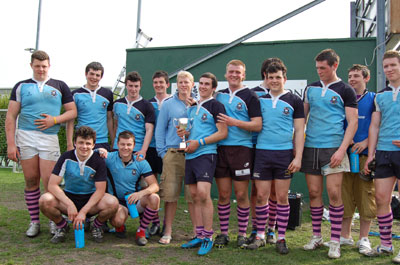 CUS pooled with schools rugby stalwarts Blackrock College and St Michael’s lost narrowly to both in the group stages but arrived at the shield final after overpowering Marian College.

In group 2 St Mary’s and Gonzaga had an epic duel with a late 2 try surge handing St Mary’s the win.

The Cup semi finals provided some tough action in the Sandymount heat. St Michael’s “MVP” Rory O’Loughlin led the way with an impressive 4 try haul in their semi final win over a spirited St Marys.

Gonzaga College did fantastic to upset the odds with a late try snatching victory over Blackrock College in the other semi final.

In the shield semi-final up and coming Marian College lost out to an industrious Sandford Park who won despite having limited players available. C.U.S. fresh from their win in the Vinnie Murray Cup overcame Sandford Park to win the Railway Shield. St Michael’s battled with Gonzaga in an end to end final, but their quality saw them finish deserved winners of the Railway Schools 7’s Cup.

The victorious teams were treated to a presentation by Railway Union and Ireland cricket hero Kevin O’Brien. The Railway Cup winners received tickets to the Leinster v Leicester Heineken Cup quarter final held at Aviva stadium which was held that evening.