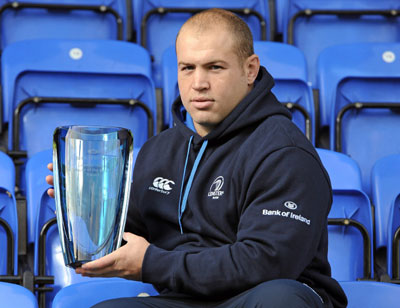 There were nine games in the period for supporters to select their Player of the Month from, including two Heineken Cup games, two interprovincial clashes with Connacht and Munster and an away game against Benetton Treviso.

Richardt played in eight of the nine fixtures and commentators noted his passion, skill and consistent set-piece work. Those who nominated Richardt were most impressed with his Man of the Match performances in the Magners League against Connacht and his performances in the Heineken Cup encounters against Racing Metro-92 and Saracens that helped Leinster secure two crucial victories.

Commenting on this award, Richardt Strauss said: “I am delighted and surprised to receive this award. Obviously we have enjoyed a good run of form recently and it has been a real team effort. I would like to pay tribute to the other players and to our coaches because rugby isn’t about individuals.

“I would like to thank Bank of Ireland for their sponsorship of this award, but most of all to the Leinster supporters who voted for me, I am hugely honoured by their backing.”

Focusing on the games ahead Strauss added: “We are about to begin a massive period in the season and it is vital that we approach the Dragons in a positive frame of mind. They have really improved this season and we know from experience how difficult they will be.

“With so many of the players away on international duty, it will be another big test of our squad but all of the players are up for the challenge and determined to build on our previous win against Edinburgh.”

Leinster supporters can now vote for the November Bank of Ireland Leinster Rugby Player of the Month. To vote simply e-mail information@leinsterrugby.ie and tell us which player you think should receive next months award from tonight’s encounter with the Dragons and next weekend’s away game against the Ospreys. Everyone who nominates a player is in with a chance to win a €;100 gift voucher.