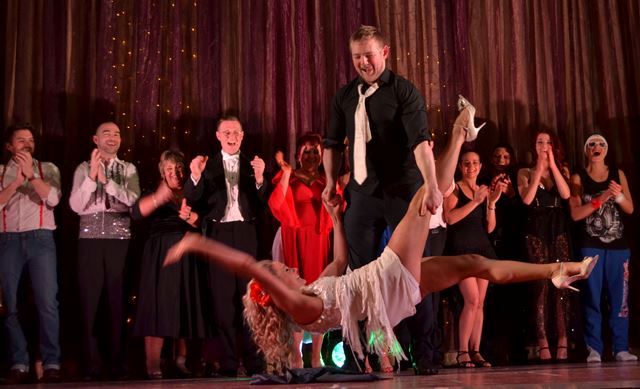 Over recent years Portarlington RFC have developed a reputation for staging highly professional and entertaining events, none more so than last year’s Strictly Come Dancing in The Heritage Golf and Spa Resort…

Following up on the success of that sold out event was never going to be easy but President Padraig Maree and his committee felt that the appetite was there for another similar event and they were proved right when the St. Patrick’s Weekend Strictly 2014 sold out in record time!

Over 800 people filled the stunning ballroom at the Killenard venue in anticipation of a night of pulsating entertainment and they weren’t disappointed. The 24 dancers, warm up and interval acts had been rehearsing for months leading up to the event and their hard work paid off as the crowd lifted the roof after each performance.

The night was opened by MC Peter McEvoy as he welcomed the stars of Burbages Irish Dance Academy onto stage. After their high tempo exhibition performance it was time for the twelve competing couples to do battle. A combination of players, coaches and well known local personalities performed a variety of dances while the Portarlington u19s and u17s produced a highly charged version of the All Black ‘Haka’ during the interval.

When the dancing was finished the crowd were then asked to vote for their favourite acts and following a very close ballot former women’s and men’s captains Sinead Lawlor and Ross Doyle were announced as the winners. Surrounded by their fellow competitors the winning couple then performed their dance one more time on stage to the delight of the huge audience.

President Padraig Maree was clearly thrilled with how the night had gone and he commended everyone involved saying “none of this would be possible without the dedication of the dancers, some of whom have no direct affiliation with the rugby club but were delighted to help with this event which has raised vital funds for our club and will enable us to bring sport into the lives of more and more young people in our community.

I would also like to thank our instructors Aisling and Carl Hannon and all of the sponsors who helped us to cover our overheads meaning that every cent raised here tonight will go directly towards running our club”.

Once the presentations had been completed the dancers were joined on the dance floor by the rest of the crowd as the disco commenced to round off another record breaking night for Portarlington RFC. President Maree was seen making notes as he spotted talent in anticipation of next year’s event!

Portarlington R.F.C. can be found on Facebook for updates on future events.