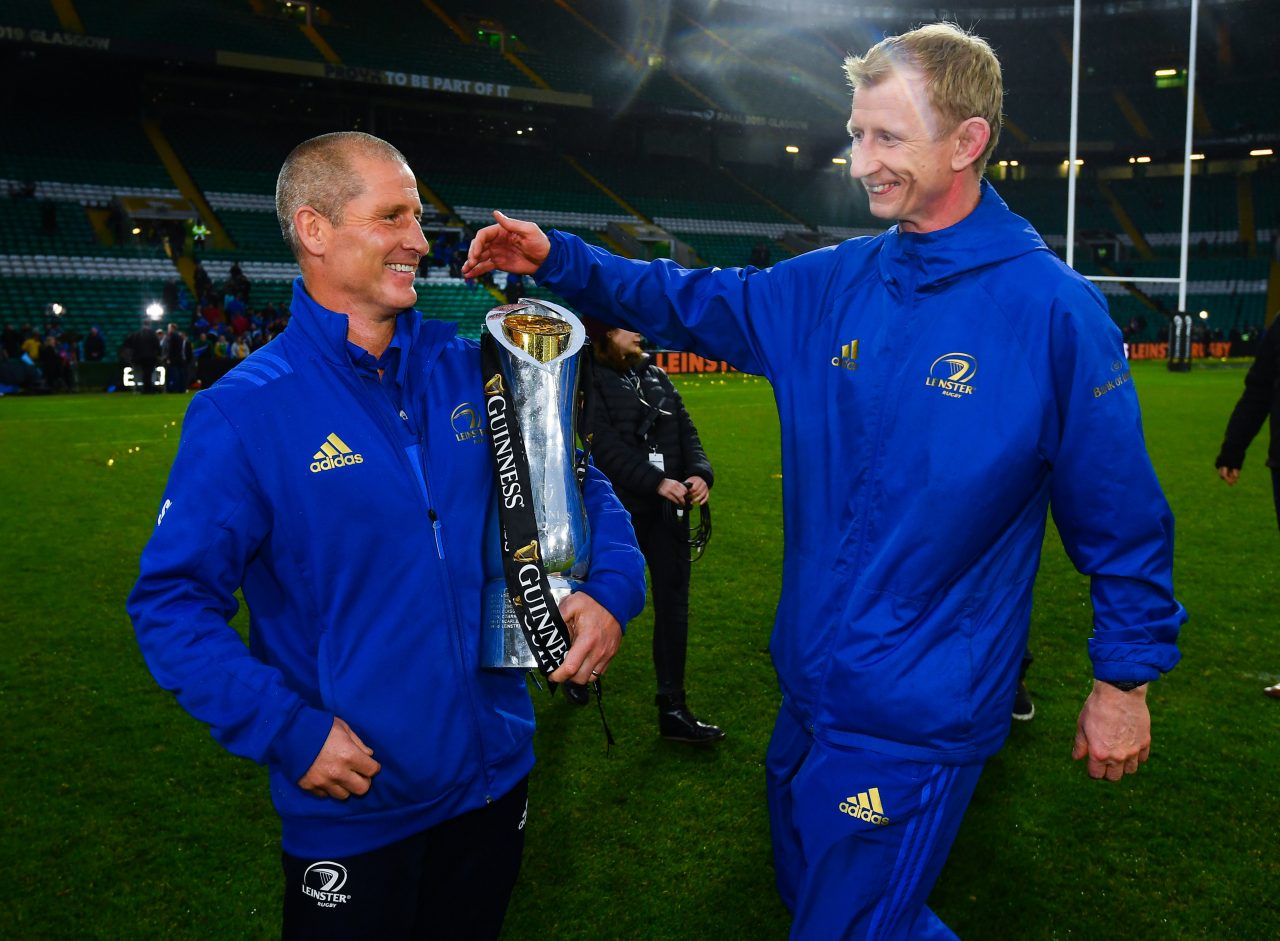 In the first part of a two-part interview on leinsterrugby.ie, Stuart Lancaster speaks about spending time at home with his family during COVID-19, being a sporting parent, and the importance of staying connected to the Leinster Rugby family.

Click here to read part two of our interview with Stuart Lancaster.

Stuart, thanks for taking the time to talk to us. How are you and your family?

We’re ok. My daughter’s 19, she’s come back from university. She was in Newcastle. She’s in her second year doing psychology. My son was actually in Leeds. He’s doing a coaching degree. So we’re all back in the same house. Having moved them out of the home, they’re now back! We’re all fine.

My mum, she lives on a farm up in Cumbria. She’s lucky in that she’s got space to walk around the farm. We’ve got fields she can get to. So she’s fine. She’s been keeping her distance from everyone and everything, but she’s doing well. My brother’s in the village, so he can look out for her.

It’s a strange period but it feels very similar to me to the window between finishing England and joining Leinster. I had that window between November 2015 and September 2016. Different circumstances but there was no real full-time job to get up in the morning for, so you’ve got to find your purpose every day. I’m quite good at that, I’m quite disciplined at getting up early, I’ve usually got a list of jobs to do. I’ll create work if there’s none to be done. So I’ll do coaching stuff, connect with the players. In the UK, obviously, there’s a lot more cases I think proportionately than Ireland but there’s no one I really know who’s caught it, so we’re all ok.

That’s good to hear. You mentioned your daughter’s studying psychology and your son is involved in rugby and coaching. It sounds like they’ve taken after their dad.

It wasn’t by design; they very much chose their own paths. But there’s definitely a link between what makes great teams in terms of the psychology of teams, understanding the psychology of individuals, how to get the best out of people, how to deal with stresses or pressure, how to deliver on the day, resilience, motivations.

They’re all psychological traits that are critical in building long-term, high-performing teams. I did a sports science degree with an element of physiology, a bit of psychology, a bit of biomechanics. So I’ve always been interested in it. I’ll often read books, not necessarily journal articles, like academic articles, but books on the psychology of sport. Or the psychology of human behaviour – what motivates people to get the best out of them. I think that if you weave that together with your technical knowledge and the way in which you’re trying to grow the team, that’s where the sweet spot is.

What books are you reading?

*Holds up a copy of Jim Collins’ Good to Great*

I’ve actually read this before, but I’m re-reading it. That’s today’s book.

Do you ever get tired of discussing sport or coaching?

Not really. I am passionate about it, really. I do enjoy it. Obviously, there’s family time, but I’m usually dwelling on something even though I look like I’m watching TV.

The cogs are whirring.

I’m training with my son at the moment. He’s 18. He had an MCL injury so he’s on his way back from that. We’re both trying to follow Charlie (Higgins)’s programme from Leinster to keep us in shape. I’m trying to keep up with the players so when they come back at least I can keep ‘Stu-esdays’ where they want it to be.

It gets easier as your kids get older, there’s no doubt. Being a sporting parent and being a coach of your children is tough when they’re in the teenage years and they think they’ve got all the answers to everything. I actually wrote an article on it and it’s on my LinkedIn feed about being a good sporting parent. But now he’s a bit older, I can go kicking with him or we can do some passing together. We’ve got a little Astro in front of our garden and we’ve got a kicking net so he’s been smashing the ball into that on a daily basis, perfecting his dropkick for the World Cup Final. My daughter’s on some sort of step challenge, so we’ve now got the fittest dogs in Leeds. 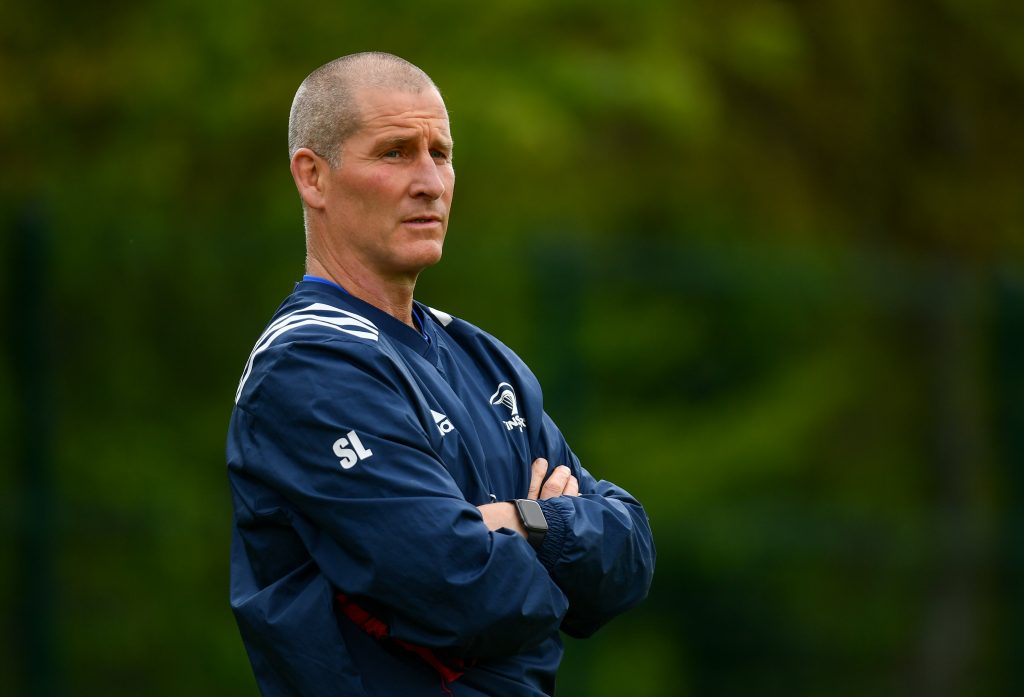 Did you ever imagine as a former England head coach that you could be welcomed so warmly in Ireland?

I think it works both ways! I’ve said consistently, I needed someone to give me an opportunity after the World Cup and Leinster were the only team really that were prepared to do that. I’ll be forever grateful to Leo (Cullen) in particular, but also Guy (Easterby) and Mick (Dawson) and everyone else behind the scenes that gave me a chance. There is a similarity definitely between the mentality of the Irish and the mentality of people in Cumbria, where I was born. The north of England generally is very similar. It became very easy, almost seamless to move and live in Dublin and also coach the players.

The players were so welcoming, mainly from the Seniors downwards. The Seniors who, I guess, played against England when I was coaching England. I think they knew we were a competitive team on the up. So their support was key to start with. Once the Senior players looked like they were engaged in listening and prepared to give me the time, then the rest of the squad bought in. We got success, not straight away, but there were improvements that they saw, that they enjoyed. They enjoyed the change in training and so it built from there really. It’s three-and-a-half years now, nearly four years and it’s absolutely flown by, to be honest. It never feels like a drag doing the commute at all. I look forward to work every day.

When you arrived at Leinster, no one really knew. It was amazing that it was kept secret. It must have been nice to do things behind closed doors.

It was nice in that you had the chance to make the decision without it being played out in public, go back and have a chat with your family without it being in the press. Because with England, no matter what you did or what you said, one person tells another person, they tell another person and it ends up in the press. It was nice to not go through that, to be honest. 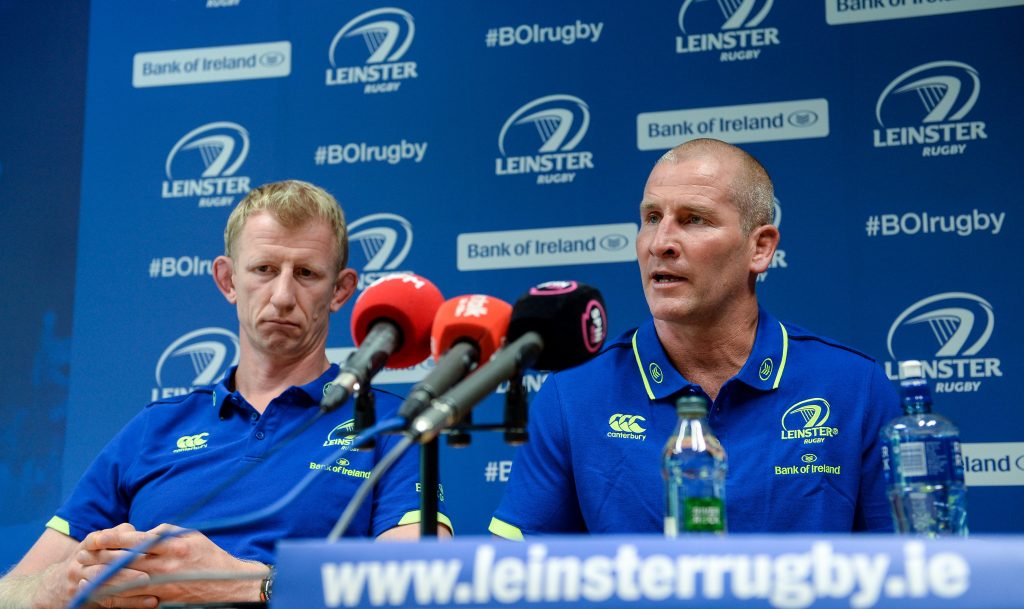 Ever since then, I’ve got a good relationship with the press, I think. I always try and give them something that’s interesting to talk about or write about. I try to do the Off The Ball stuff, pass on a bit of what I’ve learned to people in Ireland: GAA, Irish coaches, leadership. I did something for the Irish International Business Network which connects Irish businesses all around the world. Again, the same thing, trying to give something back because people have given me a great opportunity.

There was a video sent to Season Ticket holders recently that the coaches and squad were all keen to get out to supporters. The sentiment of it hit home with a lot of people.

The more we can stay connected, the better, I think. Making sure we look out for those Leinster supporters who are over the age of 70 and make sure they can come back and watch games. It’s so important. My mum’s 76 and when my dad died two years ago when I was at Leinster, I’ll never forget being sat in the ICU and the tremendous work the nurses did and the doctors did at the time. You can’t help thinking about how many times that’s happening on a daily basis. It’s a tragedy really. It’s happened to so many people and it touches so many people.

Whatever we can do to support medical staff, the people that are on the frontline, the better, really. If we do this right now, the sooner we’ll get back the better, then the more we can go back to the RDS and enjoy those evenings.

Click here to read part two of our interview with Stuart Lancaster.

To keep up with the latest Leinster Rugby news, subscribe to our weekly eZine, or follow us on social media: