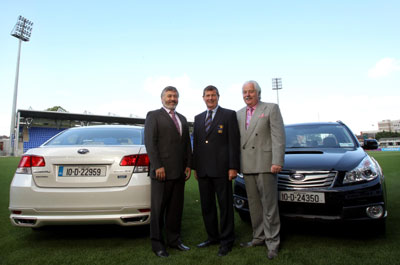 Neville Matthews, Managing Director of the award-winning brand, Subaru, has announced that Subaru would continue with the very successful sponsorship with Leinster Rugby Referees…

“We have found that during our association with the Leinster Rugby Referees and rugby in general, awareness of the Subaru brand has increased dramatically,” he said.

With the recent introduction of diesel to the Subaru model line-up Subaru can look forward to that awareness reaching new heights over the coming seasons.

Matthews also went on to pay tribute to the Leinster Rugby Referees for their tireless dedication and professionalism shown whilst carrying on their official duties, in all weathers, throughout the length and breadth of Leinster.

The President of the ARLB (Leinster Rugby Referees) Fran Nolan thanked Subaru for their continued sponsorship in difficult economic times and said that it had been very beneficial to both parties over the last six years.