Success for IT Carlow in Cork… 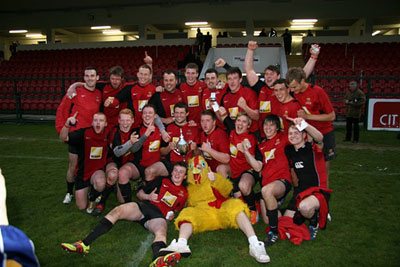 Institute of Technology, Carlow are the ICRU Division 1 champions after they ran in five tries to brush aside Athlone IT in a terrific final at the Cork IT campus on Wednesday evening…

Although Athlone’s Jaryd Bennett opened the scores with a well-taken drop goal in the fourth minute, the bulk of the first half belonged to the expansive running brand of rugby played by the Carlow back five.

Prop David Hegarty scored their first try after terrific patience in the pack on 16 minutes, before a truly amazing move from impressive left-wing Alan Kenny gave them a 15-3 lead at the break.

Carlow were also rampant immediately after half time, with Bryan Croke running in a try on 41 minutes before influential number eight Wesley Wojnar peeled away from a ruck to dive over three minutes later.

That extended the gap to 22 points meaning Athlone would need at least four scores to overturn the lead, but the Westmeath college found an extra gear and they replied with two quick-fire tries of their own.

Firstly, the lively centre Paul Harte let his pace do the talking as he galloped away from two tackles before grounding to cut Carlow’s advantage to 15 points, while Brendan Fagan also touched down in the 59th minute to fashion some sort of a comeback.

Kenny ran in for his second try of the game on 64 minutes to widen the gap yet again though, and that was the end of the game as far as the scoring was concerned, with the majority of the final stages played out in the centre of the pitch.

While the opening 40 minutes saw the scores tied at just 3-3, Darragh O’Keeffe and Colin Sheridan exchanging penalties, Cork started the second period in blistering fashion as a succession of soft penalty concessions from Carlow were all punished by the clinical O’Keeffe.

He kicked four second half penalties to add to his first-half punt, and although Jared Owens ran over a try for Carlow in the 63rd minute, which was converted by Sheridan, Cork replied soon after through a well-worked move that was finished off by powerful front-row substitute Barry McNamara.

That was a killer blow for Carlow to be dealt, and although they didn’t stop fighting in an effort to close the gap, Conor Finan’s late try wasn’t enough to derail Cork’s charge towards the title as they closed out the final few minutes in a very composed manner.

In the Division 3 final, National College of Ireland were National College of Ireland were deservedly crowned winners at defeating Institute of Technology, Carlow 18-9 as the imperious Alan McGinty stole the show in an 18-9 win over Carlow IT. All of NCI’s scores came in a dominant first-half and backed by a strong gusty wind McGinty took control with the boot, kicking two long-range penalties while running in a try of his own which was duly converted from a difficult angle.

All of NCI’s scores came in a dominant first-half and backed by a strong gusty wind McGinty took control with the boot, kicking two long-range penalties while running in a try of his own which was duly converted from a difficult angle.

Speedy wing Stephen O’Grady also touched down in the corner for NCI seven minutes before the interval, making it 18-3 at that juncture, and although Carlow had long spells of sustained pressure throughout the second half they failed to convert their possession into scores.