Sun, Sea and Scrummage in Mallorca… 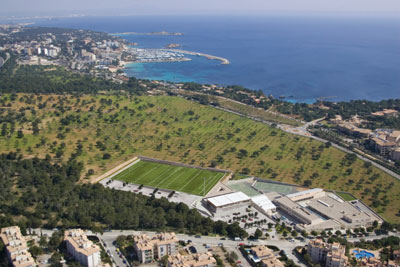 Very recently a delegation headed up by Señor Carlos Delgado, the mayor of Calvià, a municipality on the Spanish island of Mallorca met a number of Leinster Rugby officials including President, Kevin Fitzpatrick in Dublin to present a brand new rugby facility in Mallorca…

Rugby has been played off and on for around 25 years on the sunny holiday island of Mallorca. However it has been a case of more off than on because of the lack of proper facilities.

This handicap to the development of the sport is now a thing of the past thanks to a brand new, artificial grass, floodlit pitch which has recently been completed in the municipality of Calvià on the South East coast close to the beach resort of Palmanova, just 20 minutes from Palma de Mallorca airport.

Working closely with the municipality of Calvià to promote the use of the pitch, two British ex rugby players and long time residents of the island have started an initiative to organise tournaments aimed to involve visiting teams from the British Isles.

“It’s not all about the rugby”, says John Rule, one of the partners of mallorcarugby.com. “Because of the long history of Mallorca as a favourite destination for holiday makers from all parts of Ireland and the British isles an established infrastructure already exists with excellent accommodation and off the pitch entertainment which is, in our opinion, a vital part of a successful rugby tour.

“We particularly extend a very warm welcome to teams from Ireland who we will introduce to the Mallorcan version of the craic.”

There are two tournaments lined up: Easter, 23/24 April- a club XV tournament and 28/29 May for veteran teams.