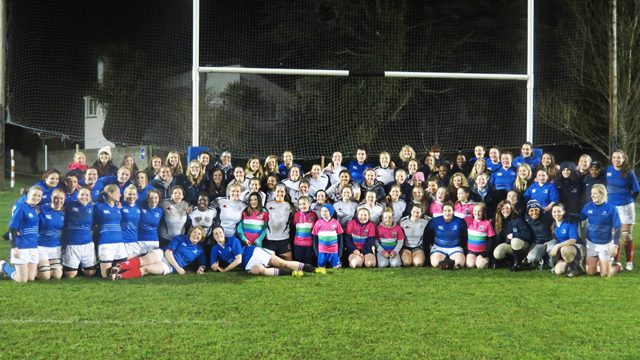 Suttonians RFC was the host venue for the Leinster Women’s Development team who fielded against USA heavyweights, Penn State, in a friendly encounter at the JJ McDowell Memorial Grounds…

Coached by USA Women’s Eagles supremo, Peter Steinberg, Penn State are touring Ireland and brought a collection of well drilled athletes to Dublin, one or two USA International players among them. On a still night on a firm track, loyal Leinster Women’s supporters were served up an absorbing game with plenty of high octane collisions, running rugby and absolute commitment from all involved. This was matched off the field by the ‘Sutton Starlets’ – the Suttonians RFC girls team, who operated as ‘ball-girls’, ‘water-girls’ and delivered a cracking game of their own at half-time.

This Leinster Development side is only beginning its journey, and despite just one training session under the belt, they went about their business with more familiarity and connectedness than may have been expected. They matched the physicality of their more established opponents from the start and set themselves a platform to play some high quality football.

Niamh Griffin at 9 and Mo Dowling at 10 pulled the strings from the halfback positions early on, feeding off good front-foot ball served up by the physical pack. Katie Norris and Ciara Cooney were central to many of the hard yards earned in a strong forward effort where every player did their part, the scrum solid, the lineout effective.

Behind the scrum captain Chrissy Doyle caused problems and on a few occasions, after good footwork, was but a well-timed pass away from creating further scores. Meg Parkinson offered a nippy, sniping dynamic when she replaced Griffin at 9 and as the game broke open the pace of Sara Phelan and Hannah Tyrrell ensured Leinster threatened every time they moved the ball into wider spaces. Truth be told, most of the Leinster backs on the night looked very capable and their development will be of much interest to all fans of the province.

Fourteen different Leinster clubs were represented on the night in the 23 strong squad, and the quality on display a credit to the good work being done by coaches at club level. The convincing win for the Development team, and the performance of a large swathe of players, will have impressed the watching Leinster coaches, and a number of Leinster’s Irish Women’s Internationals, who turned up to catch a glimpse of the future. On this evidence it looks very bright.