Suttonians U-13 gear up for Lansdowne Final… 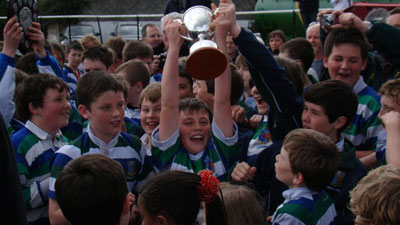 On Sunday (8th May) the Suttonians Under-13s play Lansdowne for their third trophy of the year – the Leinster Youths Cup at Barnhall RFC (KO: 11.30am)…

The Under-13s have already won the Leinster Youths League and a very tough Leinster Metro League Division 1A which included Blackrock, Old Belvedere, Seapoint and Clontarf.

This Under-13 side haven’t lost since March 2009 and hope to be the first Suttonians Youth side to complete an historic treble on the back of two seasons undefeated in all competition.

The side is very talented all the way through with a few recognisable names such as captain Hugh Sexton (brother of Leinster player Tom), Robbie Dix (brother of Leinster U-19 Paddy), Colin Currie (son of Sutton’s own Dick Currie), Dylan Forbes (son of 1s coach Forbsey) and Belvedere College 1st year player of the year Jesse Iredale.

The Feeney family will be hoping to bring home their FIFTH trophy of the season as hooker Simon is younger brother of Andrew who played with the Suttonians double winning U-15 side.