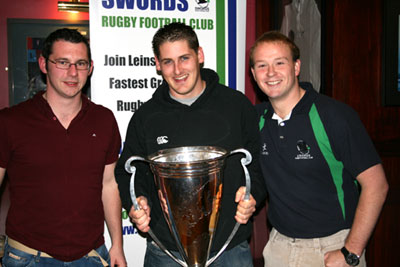 Organised in conjunction with Wright’s Café Bar, the event matched the success of last year’s inaugural draw and garnered wonderful support once more.

Nearly €;5,000 was raised in total, which will go directly towards youth rugby in the town, and Wright’s, who are the club’s sponsors, was packed out as the draw was made.

Jason Corcoran was the first name picked out, winning a pair of tickets to see both Ireland v Wales and Ireland v Scotland Six Nations matches at Croke Park in the spring.

Second prize of a pair of tickets for the Wales match went to Ross McBride, while Christy Moore picked up the third prize, a pair for the Scotland game.

Bernie and Tom landed fourth prize, a pair of tickets for the Ireland v Italy clash, while Rossi Carroll was the fifth name drawn out, winning a Leinster jersey signed by the entire squad.

Sixth prize, a shirt signed by the London Irish team, went to Sarah Keane, with Jonathan Gaul, Lisa Kennedy and Aine Griffen each receiving a e100 voucher for Wright’s for seventh, eighth and ninth prize.

Elsewhere, Tracey Flanagan, Matt Corbett, Duncan Smith, Paul Clifford and Adrian McLoughlin were all winners of the various other prizes on the night.

This is the third year Wright’s have sponsored the ALSAA-based club and Swords President Alan Butler was grateful for their ongoing support and to all those who backed the draw.

‘We had a fantastic response to our draw and we are grateful to all those who bought tickets and donated prizes,’ Mr Butler said. ‘Special thanks must go to Wright’s, the Leinster Branch and to Realprint.

‘We’re having a great year, with our first team qualifying for the ‘super six’ stage of the league, our numbers growing all the time and our youth section flourishing.

‘The draw is one of our main fundraisers throughout the year and the money raised will help the club continue our vital work at youth level.’