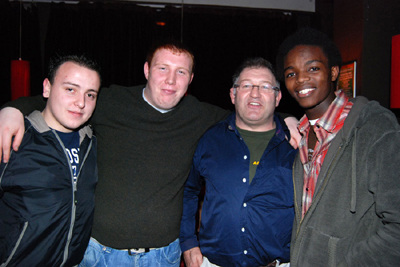 Wright’s Café Bar in Swords was awash with rugby folk as the venue held its 2008 draw recently, in association with Swords Rugby Club…

An array of top prizes were on offer including match tickets and autographed jerseys and the event drew a great deal of interest from the public.

Some €;6,000 was raised in total, which will go directly towards youth rugby in the town. Indeed, Swords RFC have employed their own youth development officer for the last two seasons.

PJ Flannery was the first name drawn out, picking up the top prize of two Six Nations tickets for the Ireland-France match at Croke Park.

Sara Baeza was the owner of the fourth ticket drawn out, winning a signed Leinster shirt, while Janelle Kelly took home a signed London Irish jersey for fifth prize.

Sixth, seventh and eighth prize went to Olga McCreanor, Marion Price and Kevin Flanagan, who each received a €;100 voucher for Wright’s Café Bar.

Elsewhere, Dominick Hever, Niall Kennedy and Noel Wilson won a bottle of spirits each, while Andy Finn received a Swords RFC jersey and Fergal Murphy was the winner of a signed Mike Catt autobiography.

It was a fine end to another memorable year for the ALSAA-based club and President, Richie Cowman, thanked all those who supported the event.

‘We had a tremendous response to our draw and we are grateful to all those who bought tickets and donated prizes,’ Mr Cowman said.

‘Special thanks must go to Wright’s Café Bar, our club sponsors, along with the Leinster Branch, Realprint, Fingal Dublin Chamber of Commerce and Philip O’Neill Photography.

‘Also thanks to Dave Cahill who worked tirelessly to organise the event. The money raised will help the club continue our vital work at youth level.’