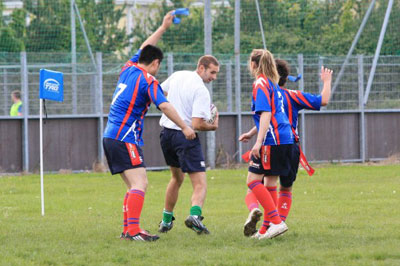 As Irish rugby grows ever more in popularity, Bud Light Tag in Leinster is enjoying similar heights in popularity as teams get set for the season ahead with new venues opening up throughout Leinster…

The sunny South East is gearing up for the summer season with Enniscorthy RFC looking forward to its third year as a Bud Light Tag venue. With comedy nights, quiz nights and the highly successful festival day mid-season all proving big hits with Enniscorthy’s tag teams and their supporters.

Mullingar RFC promises another summer of action packed evenings in the Cullion club with leagues increasing in size for the third year running while over in the Royal County, players from all around the area will descend upon Navan RFC as it also prepares for the summer ahead again.

Over in Dublin, Suttonians RFC enjoyed the 2009 season hosting almost double the amount of teams from their previous years with Bud Light Tag. Tallaght RFC will be spreading the tag word even further around south Dublin as they prepare a busy summer of leagues and post-match events.

Old Belvedere on Anglesea Rd in the heart of Dublin 4 is filling up rapidly as always and not only the mixed leagues but the veteran players of 33 years and over will no doubt be ready another summer against opposition new and old at this very popular venue.

Two new inclusions to the Bud Light Tag setup are Blackrock College RFC and St Marys College RFC/Templeogue College. In these venues alone, over 280 teams will be competing in various grades catering for male, female and mixed social leagues. This means about 3,400 players will pass through the gates of these clubs weekly during a time when the clubs would otherwise be very quiet. St Marys/ Templeogue College will also be the venue for the 2010 Bud Light Tag All-Ireland Open Championship taking place on a date soon to be announced.

The aim of Bud Light Tag, the IRFU’s official Tag Rugby programme is to provide a non-contact form of rugby for men and women of all abilities to be played at first-class rugby facilities, officiated by IRFU-trained referees and professionally organised by the governing body of rugby in Ireland.

Further information may be found on the Bud Light Tag website, www.irfutag.ie or by e-mailing the IRFU at tag@irfu.ie