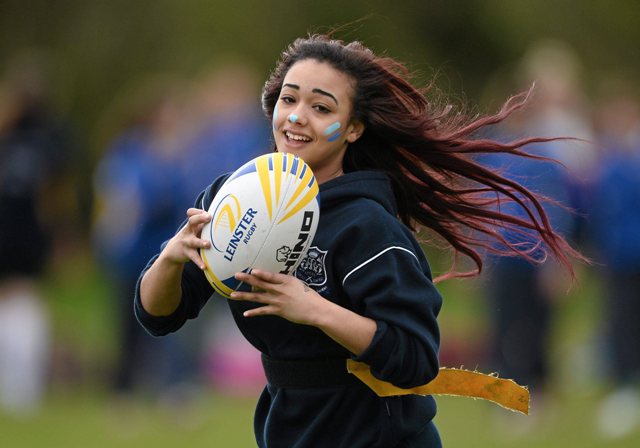 Sara O’Connor and Ruby Hughes, our roving reporters from St. Andrew’s College, tell us about their experience of a girls rugby blitz in Templeogue…

On Wednesday morning, four schools came together for an all-girls blitz and a quick ‘crash-course’ in rugby. The blitz was held in Tempelogue and is designed to both introduce girls to rugby and to give them a chance to develop their skills and interest in the game.

The blitz brought about 40 girls together from four schools across Dublin: St. Dominic’s, Caritas College, St. Mac Dara’s and Firhouse. The weather – for the first time in what seems like an age – held up nicely to make for good playing conditions allowing the girls to really get stuck in.

As we looked from the sidelines we were greeted with the enthusiastic sounds of the girls really enjoying themselves. There were tags being thrown left, right and centre and huge smiles as some girls experienced the thrill of scoring a try for the first time. Just standing and watching, the enthusiasm for the game was clearly seen.

As well as creating a fantastic atmosphere for us to watch, they were also being watched and encouraged by Leinster’s Women’s Development Officer Jenny Bagnall and Irish Lock Sophie Spence. As a massive inspirational sports figure she was very impressed “by the agility, skill and pace that such young girls are bringing to the game – even though some have never played before”. She goes on to say how “fantastic it is to see so much talent and enthusiasm”.

In recent years Women’s Rugby – not only in Ireland but worldwide – has grown dramatically. This is hugely helped by the fact that the Women’s team has proved to be very successful. Not only has it gained popularity and respect , but there has also been a massive change in the progress being made in the club rugby scene as well. Having experienced the ins and outs of Women’s rugby over the years, Jenny was pleased with the demonstration of the game at the blitz on Wednesday:

“It’s fantastic to finally see girls so keen and enthusiastic about the game for a change.

“Over the years, the growth of the club game – for girls especially – has been massive. Over the last three years we have gone from having only seven girls’ club teams to now having 29! This has been possible due to more focus through schools. By giving the girls the chance to experience a feel for the game through ‘taster’ blitz’s like this one and by getting them playing tag, we are increasing the enthusiasm and interest for the game as well as increasing the number of people actually playing.”

To top off this exciting experience we got a very strong and positive sense of teamwork and mutual ambition. Amidst the various cries of “TAGGED!” and “PASS!” came proud moments of  “Go on girls!” and “Amazing try!”. Witnessing team-building between these girls was incredible. When asked 10 out of 10 of them said they would like to play again, and even make it a more regular activity.

With the success of Women’s Rugby helping to promote the sport for all age groups and abilities, Leinster Rugby is doing a fantastic job involving girls from all different clubs/schools, trying to gather as much awareness for the game as possible. It’s promising to see just how far it’s come and the massive growth in the game already – let’s hope it continues!