Talented Lansdowne prevail but are forced all the way… 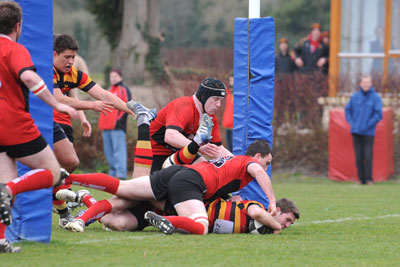 Lansdowne outscored their opponents by ten points in the end and adopted a more fluent and expansive approach, as victory went where it was most deserved – they were the better organised and disciplined of these two sides. The manner of this victory was also important as it lay down a marker to their semi-final opponents Cork Con.

A ten minute purple patch just before the break allowed UCC cross for two tries and take the lead at half time, but apart from this the home side always looked in command. It was the influential Craig Ronaldson who kept the score board ticking with an impressive haul of 28 points, which included two superb tries.

Lansdowne were quick to signal their intent at the outset of the contest. David Heffernan made the initial incursion into the opposition half, and a three man move involving Patrick O’Driscoll, Ross Farrell and Tadhg Byrne paved the way to send centre Jack McMahon under the posts from close range. Ronaldson was successful with the conversion.

The lineout began to generate momentum for the away side as they pinched three of Lansdowne’s throws. This led to an attacking platform which resulted in Luke Duffy kicking a fine penalty from out wide.

Livewire right wing Neil Cullen made a number of outstanding thrusts, excelling with and without the ball as the game progressed. Receiving possession about 35 yards out, he raced into a gaping hole, only to be hauled down five metres from the line when the UCC defensive alignment looked completely out of shape. The ball was recycled, and a UCC infringement three phases later, provided Ronaldson with an easy three points.

The rest of the half was dominated largely by UCC, although at times they never looked like breaching a granite Lansdowne defence where Charlie Butterworth and Heffernan were outstanding.

UCC continued to dictate proceedings, and Ben Cunningham fielded another Lansdowne lineout and drove forward to bring play 10 metres from the opposition line. Scrum half Ronan Barry switched the point of attack to Kevin Kidney, who raced over in the corner. Duffy stretched the line from the conversion.

Just before the break came the stamp of quality, and what a try it was. UCC stole possession deep inside their own half, and filtered the ball wide to Oscar O’Suilleabhain. The winger lifted a delicate chip over David Layden, collected possession and offloaded to the abrasive Johnny McCarthy who sprinted in from half way.

Trailing 15-10 at half time, Lansdowne duly cranked up the pressure, ably led by the enthusiastic Heffernan.

They stretched their opponents at every opportunity, with Ronaldson and McMahon moving the backs at pace. Four minutes into the second half, Layden surged forward, and from the ensuing maul Heffernan took possession, fended off three opponents before Ronaldson waltzed in under the posts. He converted to make it 17-15.

The visitors refused to buckle and a sweeping, right to left move allowed Gavin Nugent come into the line and touchdown to restore the lead for UCC.

Three more spectacular penalties from Ronaldson over a 12-minute spell sent Lansdowne back into a three point lead after UCC’s Kelly had previously levelled the game with a stunning kick from just inside the half way line.

With ten minutes remaining, Lansdowne simply cranked up the intensity and a cleverly weighed pass from Ferdia Doherty allowed winger Neil Cullen to burst through the first line of defence, taking play deep into the opposition half. Two phases later and with the industrious Lansdowne pack on top, Ronaldson gathered possession and ghosted between two would-by tacklers for his second try.

The rest of the contest was played largely in the mid sector of the field with Lansdowne retaining possession cleverly, while showing an organisation in defence that denied UCC a late consolation try.

Man of the Match: Craig Ronaldson. His contribution of 28 points was essential in this contest. Looked very composed going forward and held his position well. Proved to be a dangerous presence from the boot all afternoon.