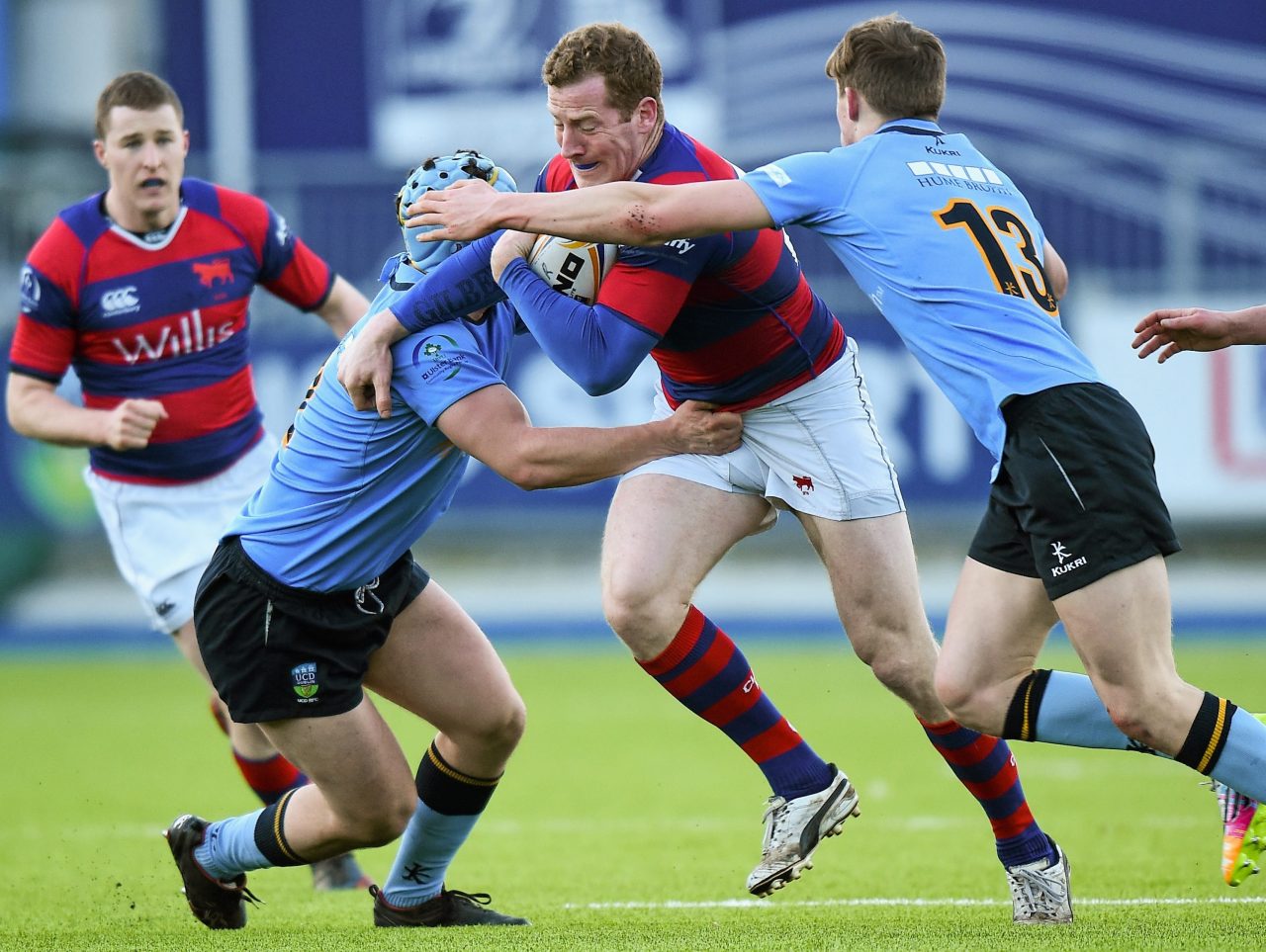 Replacement scrum-half Peter du Toit turned this Leinster Senior League Cup final on its’ head with a superb cameo, concluded by his second try at Donnybrook on Saturday.

An all-in bout of pushing and shoving led to an increase in tension and physicality. It was then College kept clear heads to strike back in typically fine style.

Their out-half Stephen Murphy’s nicely weighted grubber was taken up cleanly by left wing Tom Fletcher to find Garry Ringrose in support for a well-worked try which Ringrose failed to convert in the 15th minute.

‘Tarf flanker Karl Moran made something out of nothing to get go-forward and prop Ivan Soroka popped up in midfield to run over the top of centre Harry McNulty to recover the lead 8-5 for the northsiders, Joyce’s conversion landing on top of the upright.

Then, Moran’s slight of hand put centre Matt D’Arcy flying through on a cutback and the ball was shifted left-to-right for centre Evan Ryan’s pass to elude wing Michael Browne.

UCD were forced to counter from deep with Billy Dardis almost getting away from the vigilant centre Ryan. They were beginning to struggle to find a foothold.

Hooker Turlough Considine made them pay for gambling from deep by reaching out to intercept and haring away to the line for Joyce’s conversion to make it 15-5 in the 26th minute.

The most impressive aspect of Clontarf’s approach was the ease with which their forwards, like lock Tom Byrne and number eight Anthony Ryan, moved onto the ball and made it available.

They looked close to a breakthrough when referee Montayne reversed a penalty Ryan’s part in another incident of ‘afters’.

Ringrose finally took it on himself to drive the ball long. It was sent back with interest by Rob Keogh. Stephen Murphy faked to kick and countered with the aid of Ringrose.

Hooker Risteard Byrne made ground around the side of a ruck and a devious hand was spotted by Keane. Ringrose hit a smashing penalty from the left for 15-8 in the 36th minute.

Another Murphy grubber was collected by number eight Shane Grannell. Scrum-half Nick McCarthy nearly escaped down the blindside. The recycle saw Billy Dardis and Ringrose pass Adam Byrne free on the right. He was stopped short.

The close-in drives came and eventually prop Liam Hyland powered over from three metres for Ringrose’s conversion to make it 15-all at the break.

It was all to play for and College went straight into overdrive as they went sideline-to-sideline. A loose ball, however, was booted clear by Clontarf scrum-half Sam Cronin to illustrate how the tide could quickly turn.

They turned on the pressure at scrum time to force a turnover there and moved the ball right where College ripped the ball away in the tackle. It was Ringrose’s turn to clear his lines.

When Clontarf came back looking for points, College out-half Murphy caught their inside defence napping and sped away for McCarthy to carry on the move. It caused an offside which Ringrose took advantage off with the lead penalty in the 50th minute.

Then, Clontarf left wing Michael Browne cleverly sniped the blindside before his release appeared to go well forward for replacement du Toit to ground out a dubious try.

Ringrose repaired the damage done with a monster penalty to make it 21-20 and his blindside Josh Murphy broke tackles to feed flanker Donagh Lawlor on the charge. UCD were in position to strike.

Full-back Dardis showed up with a wall of defenders in front of him. He quickly chipped over the advancing numbers, picked up on the bounce and put on the after-burners to leave three players groping thin air. Ringrose’s conversion made it an eight-point game.

The two-score lead looked secure enough until centre Matt D’Arcy sped onto a flat pass from Du Toit for Joyce to cut the deficit to the minimum in the 69th minute.

The transformation was complete when UCD wing Tom Fletcher was forced to concede a 5-metre scrum. The direct runners were led by number eight Ryan and when the defence had been stretched, Du Toit broke it in the74th minute.

Replacements: P du Toit for Cronin, A Browne for McGrath both 48 mins; M Garvey for Og Murphy 55 mins; A McGiveny for M Browne 70 mins; A Sutton for O’Keeffe 74 mins.

Replacements: J Murray for McNulty 57 mins; B Cawley for Thornbury 75 mins; B Holland for McCarthy 78 mins.