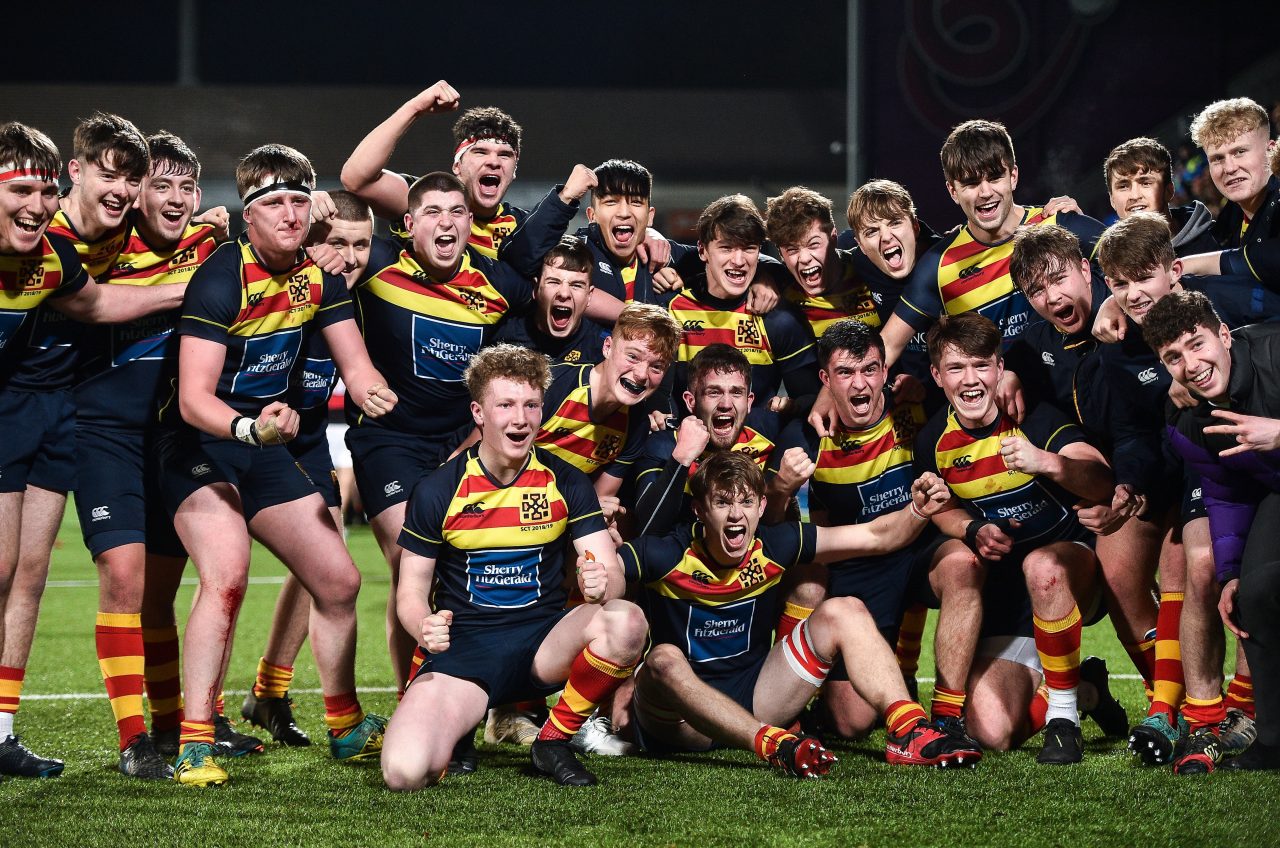 The remarkable rise of Temple Carrig came to fruition when capturing the Bank of Ireland Vinnie Murray Cup on a sunny afternoon at Energia Park.

This is the first year in which the Greystones school, established in 2014, has had a full six-year cycle and they celebrated it with a significant piece of silverware, after a torrid comeback by King’s Hospital.

The return of King’s Hospital No 8 Steven Walsh gave them an extra dimension in the back row from a burst onto the ball, feeding wing Adam Bagnall for solid gains.

The direct route suited Temple with prop Jordan O’Connor twice leading the charge in a fine movement which ended with second row Joe Barford crashing over for Thade Shanahan to convert in the sixth minute.

Hos’ were not quite as connected in attack, lock Jack Ormsby and Walsh making inroads before Temple hooker Howard Noonan came away with the ball.

Full back Shanahan could not quite extend the lead with a long-range penalty but they were still in position to strike, And they did just that from a set play, outhalf Cian Leonard and Shanahan moving the ball into the hands of Eoin O’Neill, who had the speed to outstrip the defence.

Shanahan converted from the right touchline for 14-0 in as many minutes. They got up a head of steam from the restart to mount another attack, flanker Max Scully the spark this time.

The Palmerstown school was restricted to flashes of potential from Walsh, full back Eoin Francis and outhalf Matthew Mahood.

When they couldn’t maintain the pressure, Temple moved with a sharper cutting edge as centre Josh Sproul and lock Gerhard Zdunek threatened enough to draw a penalty for Shanahan to dispatch in the 24th minute.

This added to the pressure on Hos’ to get back into the game and forcing passes caused a turnover which, in turn, led to a lineout. Scully fielded at the front and blindside Cillian Burke swept around for a powerful finish, Shanahan matching his earlier conversion from under the stand for 24-0 at the break.

Back to the action, there was a great deal more purpose to KH, taking the ball on at pace through Alexander Walsh, Hugh Perry, Steven Walsh and, ultimately, Oluwatoni Lawal for Ormsby to convert in the 41st minute.

Suddenly, they were filled with confidence, Walsh giving the go-forward again to squeeze a penalty, staying patient enough for Mahood to make an outside break and centre Kenneth Cooper to spin away for their second try, Ormsby cutting the difference to 24-14 in the 47th minute.

Temple Carrig reacted better this time, winning the ball back to force a penalty which Shanahan landed from 40 metres. Even so, KH were on the front foot, Walsh and Cooper eating up the ground and Mahood’s crossfield kick just eluding wing Adam Bagnall.

Then, Scully was binned for a maul infringement, Lawal got to within a foot and Mahood fed Cooper for his second try on the hour.

They weren’t done just yet, managing field position and possession to give themselves a shot at a miracle from Ormsby’s drive and conversion in the 68th minute.

Hos’ came one last time, Mahood slipping a tackle as Temple looked out on their feet, the improbable looking increasingly possible until the ball went to ground to signal the end of a titanic tussle.