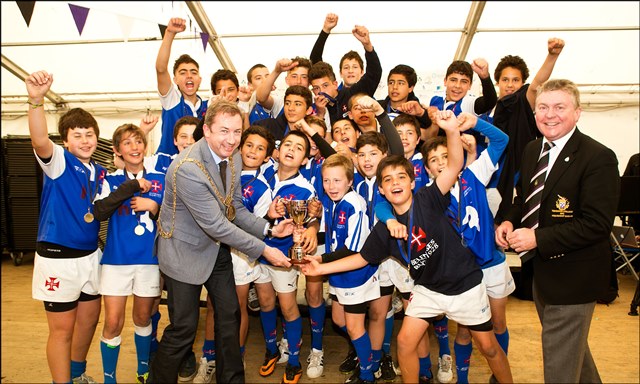 The place to be this May Bank holiday for rugby fans young and old turned out to be Terenure College RFC for the Terenure 13’s European Youth Rugby Festival. This tournament, now in its third year, has become a showcase for some of the finest rugby talent at the 13s age group, and not just from this country.
This year numbers were kept tight to 16 teams to facilitate a competitive and exciting battle of the best at this level, with all four Irish Provinces of Ireland being represented and teams travelling also from England, Scotland, France, Portugal, Belgium and the Netherlands.
Feedback from all the visiting teams was really positive as seen from some of the comments below from the Lurgan Rugby Club Coach and the Bracknell Coaches ‘just a quick word of thanks for a splendidly organised event at the weekend. My players, parents and I had a ball, made some new friends and experienced and played rugby at a far higher standard than during our regular season with a good deal of success’.
‘on behalf of the entire Bracknell coaching set up, can I ask you to pass on to your team our very warmest thanks for a simply sensational tournament. From the moment we arrived we were made to feel very welcome in a truly genuine way. The organisation was smooth, the facilities wonderful and the atmosphere was just one of a true international rugby family.We came with our normal intent to play flowing champagne rugby and make everyone smile at the same time. We hope that we achieved that objective across both of our teams. Our boys certainly had an awesome adventure’

The Tournament is an excellent example of good planning and solid execution featuring a well-managed timetable across four full sized pitches, ample pitch stewards and attention to every aspect of safety were prerequisites of the 2 day tournament – even the weather was on our side!

This year saw a number of new international sides join the fray, Portugal, Bracknell Bulls and Kitura from Belgium in addition to the 2012 winners Canet Ste. Marie (Perpignan) and Winchester, which raised the excitement level before a ball was even kicked. As for the rugby on display, that was excellent too, with very strong showings from a number of those in attendance. Day 1 featured four Pools of four, which were topped by the Bracknell Bulls, Cane Ste Marie, Monaghan, and one of two Terenure sides in the competition, Terenure Hurricanes, all of whom topped their tables with maximum points. These went forward to the Cup competition on Day 2, joined by the best 4 runners up, Clontarf (Leinster), Skibbereen (Minster), Old Crescent (Munster) and Belenenses (Portugal). Day 2 also saw a Plate and Bowl competition, ensuring all teams got plenty of match time.

The level of competition on Day 2 was spectacular with a number of standout games, however the clear favorites were Terenure Hurricanes who beat the much fancied Bracknell Bulls in a nail biting cup semi-final 10-0. The surprise package turned out to be the Ulster boys, Monaghan who beat Bracknell Sharks 32-0 in the quarters and Lurgan 14-7 in the semis – some improvement for Monaghan’s loss to Terenure in the semifinals last year.

During the weekend, the 3 Cups (Amlin, Pro12 and 6 Nations) made an appearance,  Dublin’s Lord Mayor (Oisín Quinn)  enjoyed some of the matches and was on hand to present the winners with trophies and medals. There was also a Puc Fada exhibition challenge, a senior game featuring a Dutch visiting team playing a Terenure representative XV. Day two also saw a very special event featuring an exhibition by the Terenure Tigers – The Special Needs Rugby team for boys and girls.

The eventual Cup final between Belenenses and the Terenure Hurricanes was a bruising affair, which went against the bookies odds, with Belenenses racing to a 17-0 lead by half time with some spectacular fast tries along the way … it appears champagne rugby is alive and well in TCRFC. Terenure Hurricanes fought back bravely scoring 2 converted tries but in the end ran out of time and lost 17-14. So the cup heads off to Portugal after a one-year rest at home.

Ayr from Scotland and Terenure’s second side the Terenure Cheetahs contested the plate final. This one did not go the host’s way, with Scottish side taking the spoils 27-0, a highly entertaining game played with Great Spirit from both sides.

Speaking of spirit, a very special award went to Bracknell RFC from England who took the Fair Play award, a special award for teams exhibiting the real nature of this tournament – camaraderie, fair play, cultural exchange and respect.

The organisers hosted an international challenge game between an Irish XV and an International XV (featuring the best of the players in the tournament – as chosen by their coaches). The International side outplaying their host country and running away convincing winners in the end.

In all the organisers of the Terenure 13s can be congratulated for another superb tournament, which left nothing to chance and which epitomized the awareness amongst players of the wonderful values that such a rugby tournament can bring.  This year for the first time the The finals and awards presentation on Sunday were streamed live by our broadcast sponsor BrandTV.ie The Live stream was viewed by 700 overseas rugby supporters  and families of the participating teams as well as by a  further 270  Irish fans who couldn’t attend the matches. The results were also announced real time on twitter! The Tournament is well on its way to being a “must attend” tournament for Europe’s finest, and if this year’s tournament is anything to go by, many of these were present at Lakelands Park this weekend.