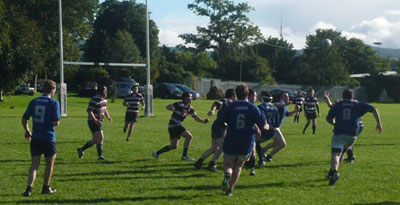 Terenure College RFC played host to ‘Rugby’s Ryder Cup’ on Saturday, with a large crowd in attendance to watch five teams from the club play against their counterparts from St. Mary’s College RFC…

Teams from the Under-21s, J5, J3, J1 and Senior levels battled through the changeable weather to produce some great games, with St Mary’s triumphing in four games to win the Dr. Mick Smyth Trophy.

In between matches, the crowd entertained themselves, young and old, on the bouncy castles, with over 100 people attending the pre-match lunch. Live music and a barbecue kept the atmosphere going, with both sets of supporters enjoying themselves well into the night.