The OBRFC Dunne and Keogh “Twins”… 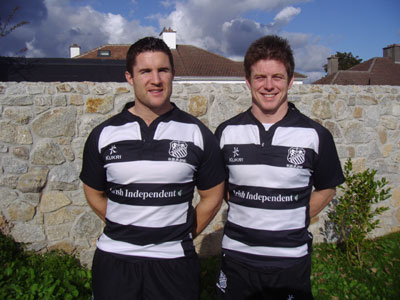 In 1998, Simon Keogh joined after Leaving Certificate at St. Michael’s College and was readily identified as a serious prospect at scrum-half.

Meanwhile, Andrew Dunne joined the U.C.D. Academy, after 10 years at Belvedere College SJ, but came to Old Belvo one year later in 1999. The two half-backs did not know it at the time but their paths were to be closely linked, up to the present day.

After three successful years together at Anglesea Road, both armed with Leinster contracts, then Leinster coach Matt Williams encouraged them to join Clontarf F.C. and St. Mary’s respectively as both clubs were in Division 1 of the AIL at the time.

In 2003, they both joined Harlequins in London and had two years there together before John Connolly invited Dunne to join Bath Rugby Club. A short way into the season, Connolly was given the job of Australian Coach, whilst Simon stayed at Harlequins, Andy was contracted again at Leinster in 2006 and Connacht signed him in 2007 where he remained for two years.

Meanwhile, Simon was invited back to Leinster in 2008, this time to continue on the wing where he had played most of his games at Harlequins. Andrew was tempted to go to France after his spell at Connacht but elected to end his professional playing career and resume playing full time at Old Belvedere in 2009, as 1st XV captain.

He also commenced full-time physiotherapy studies at the Royal College of Surgeons in Ireland. In 2010, Simon Keogh signed off with Leinster and resumed fulltime at Anglesea Road, reverting back to his original position at scrum-half.

The two, who finished secondary schooling in 1998, are really enjoying their rugby and are again making a strong contribution at Old Belvedere R. F. C. All the members wish them well for the future, on and off the pitch.