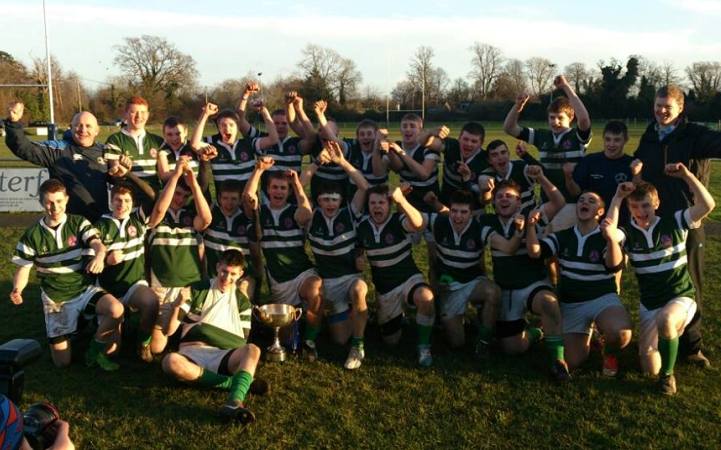 On Wednesday the 15th of January, Tullow Community School won the Under-19 Rugby Schools Development Cup for the first time ever. It was third time lucky for the school, who had played in two previous finals only to be pipped at the post.

The match was held in Barnhall R.F.C, and Tullow got off to a dream start. With just a quarter of the game gone, they 17-0 to the good. Their opposition, Ardee C.S, just could not break down the Tullow defence. Tullow used their maul to tremendous effect, and despite fierce pressure from the opposition forwards, Tullow bullied their way over for two tries.

However, a team doesn’t dominate for an entire game. Ardee enjoyed good possession after the break but still could not penetrate the Tullow defence. Once the Slaneysiders got their hands on the ball they made full use of the possession. Their backs showed what they were made of as they took turns breaking through the opposition defence for some very well worked tries.

Ardee were deflated and started to wilt as Tullow racked up the scores. Tullow never let up for the remainder of the game which eventually ended 48-0. The final whistle was a cue to celebrate a highly significant win for the school. It was a terrific team performance with every member of the panel taking to the field.

Coaches Willie Kelly and Larry Canavan were immensely proud of each and every one of them as were all the supporters, teachers, and parents. Among the supporters were many past pupils who had played on the previous teams and came along to show their support. On arrival back in Tullow there was a very influential past pupil waiting to greet them, Sean O’ Brien who only that day had signed a contract to keep him with Leinster for the next two years.

Well done to everyone involved.